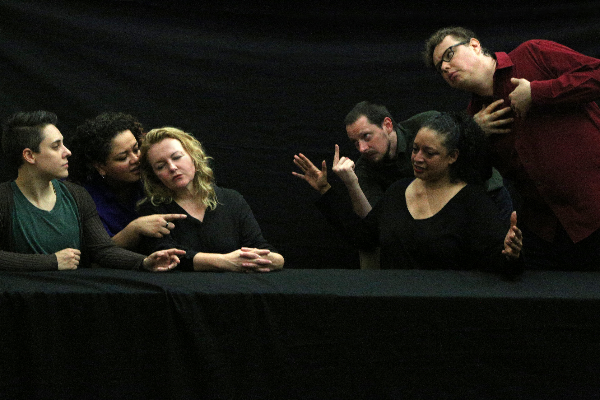 BOTTOM LINE: A nature boy called John the Baptist tries to change the world with the help of some amazing silent partners.

If you want to see a show that will make you sit down and rethink reality, Gideon Productions is a good bet. This October, Gideon has occupied The Brick in Williamsburg with Sean Williams's Almelem. (As a bonus, not to mention a feat of theatrical dexterity, Gideon will also do several performances of Musical Chairs, which they toured to Cincy Fringe Festival this summer.)  Whatever the content, this creative team has shown that they are bound to surprise you. Do you stay awake at night thinking about how John the Baptist ran a political campaign? You will now, and with midterm elections looming the timing couldn’t be better!

As a FringeBYOV show, Alemelem is not beholden to the quick setup and strike challenges of FringeNYC, so  there is time during the pre-show to appreciate Will Lowry’s abstract, wooden set and lighting design. Soon we find ourselves inside the bustling Judaean business headquarters of one Gestas (Nat Cassidy) and his apprentice Almelem (Dani Martineck). These new characters in familiar tales from the Gospels are signing contracts and hanging their papyrus manuscripts to dry. The business occupying this oppressed population is prostitution and other easy forms of money transfers, and the class division in Jewish society leaves the people disconnected but allows everyone to enjoy sensual pleasures.

While the demented ruling Herods try to control the Hebrews and appease the Romans, the people have grown committed to revolution. More gather every day by the Jordan River to be washed clean of their sins by a nature boy who Gestas knows from childhood and who now goes by “John” (Mac Rogers). Gestas begins to call him “John the Baptist,” and, although not thrilled with John’s outdoorsy odor, is gradually persuaded to finance his consciousness-raising. Almelem, faithful young mind open to the possibilities, asks what would happen if all the Jews joined the new messianic movement but kept Romans (even the most forward-thinking of them) away. John himself is surprised by the growing number of baptized, and by the appearance of the disarmingly humble Jesus of Nazareth. Gestas speaks with the seasoned Mary Magdalene (Charleigh E. Parker) and her elegantly dressed friend and business associate Salome (Yolanda Kay) about whether John or Jesus should be promoted as the messiah. Before long, King Herod tries to join the rebirth activities, is attacked by John, and throws the troublemaker in prison.

From there, things move quite quickly. While we don’t see Jesus onstage, we witness a stunningly emotional explanation of events from his mother Mary (Kristen Vaughan). In her beautiful blue and white costume designed by Amanda Jenks, Mary convinces even Gestas that she knows Jesus is divine. Her rapturous encounter with the Angel Gabriel could be a random sexual assault or a real live annunciation; we don’t know, but we see someone who is so in tune with the dignity of all life that she is just breathtaking. For practical purposes, Jesus is going to have to take over. The will of the people apparently can’t be stopped, although the Romans will definitely try, and where will that leave Gestas, Jesus, and their devotees? The ending may be familiar, but like the rest of Alemelem, cleverly constructed as a kind of PR event, it will surprise you. Often it is those behind the scenes, such as Gestas and Almelem, who shape the narrative.

Sean Williams’s turn as playwright for Gideon Productions has been long overdue. Almelem focuses on a short stretch of Biblical time in a funny and imaginative way, like keeping track of the weeks and months by counting the number of baptized. It's like studying the Revolutionary War by following Benjamin Franklin’s fundraising binges around Europe. Director Jordana Williams brings doubt into the most unchanging of stories (well, ignoring the differences in the Gospels) and unleashes much nervous humor. Even when someone is in jail or talking about the good old days of the brothel industry, there is a lingering stamp of humanity and goodwill. Could we start again, please? What would be the consequences if we don’t?

The non-binary performer Dani Martineck cuts right to it as Almelem, who speaks longingly of being reborn, no matter who or what you were in the first place. Jacob Subotnick’s original music is as haunting as the story. From the somewhat gonzo approach of Mac Rogers as John, to the materialistic and intimidating performance of Nat Cassidy as Gestas, it is hard to be 100% certain of success in this world. Acceptance of risk, and the gnawing suspicion that someday all Romans will imperfectly follow Jesus, still can’t stop the events of Almelem. See it for the strong characters. And then talk about it with your friends, your religious figures, or your elected representatives.

(Almelem plays at the Brick, 579 Metropolitan Avenue, through October 27, 2018. The running time is 2 hours with no intermission. Performances are Thursdays through Saturdays at 7, and Sundays at 2, with an additional performance Mon 10/15 at 7. Tickets are $20 (plus $3.63 ticketing fee), and are available online at fringenyc.org. For more information visit gideonth.com.)