A Brief History of Colonization 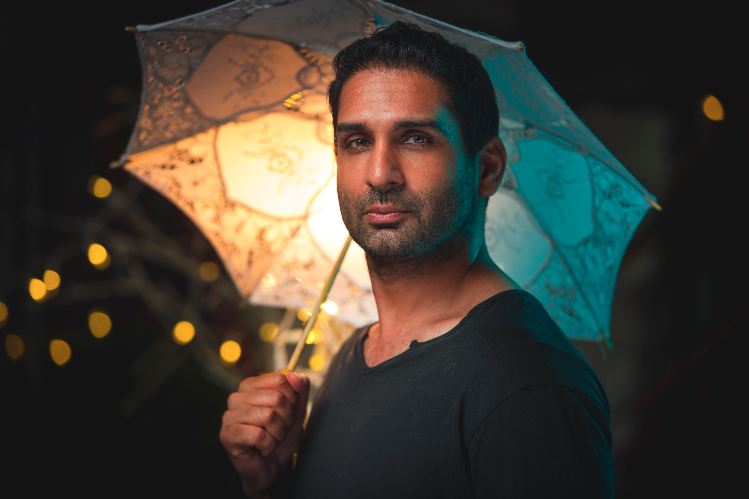 Kal Mansoor in A Brief History of Colonization. Photo by Ze' Castle Photography.

BOTTOM LINE: Tired of auditioning for roles as terrorists and cab drivers, Kal Mansoor produces a star-studded film about centuries of colonization of India.

Have you noticed that there are only white soldiers in the recent war film Dunkirk? Why weren’t the (more than 2 million) Indian, Caribbean and African troops in the British and other Allied armies included in this recreation? For an explanation of this mystery and the rest of Indian history from 1498 to the present, see Kal Mansoor's A Brief History of Colonization. With the aid of a projector (lighting design by Christopher Leidenrost) and his vast store of voices, Mansoor tells the story of his complicated relationship with India, a country the British exploited and one that gives the world so many things from which he, as a British and later American consumer, clearly benefits. From the landing of Vasco de Gama at Calicut to the arrival of the British East India Company seeking to manufacture and trade textiles, Mansoor has the audience exclaim ironically “Thank God that doesn’t happen anymore.”

Indeed, Mansoor didn’t become an actor just to play terrorists and cab drivers. When he inherits some money, he realizes the time has come to make his own film. To that end, Mansoor has his agent offer many famous actors roles, but this doesn’t go exactly as planned. It would be nice to have Indian legend Shah Rukh Khan play the Zamarin rebel leader, but they can only get Gerard Butler; oh well, he’s Scottish and hates England. Later we meet the Dutch East India Company, an international opium ring, followed by the strong and stuttering types like James I (played by Hugh Grant), the Mughal Shah Jahangir (played by Ryan Gosling) and Danish colonizer Robert Crappe (played by Ben Affleck). While the Danes contract malaria and go home, the French (represented by John-Claude Van Damme) colonize the southeastern city of Pondicherry. Next comes the Seven Years War, a global conflict in which England fights “Indians” in North America as well as in India.

As the years pass and millions of Indians are starving, their efforts to take control of their own country are labelled a “mutiny.” By the twentieth century, peaceful protests are met with massacre. Mansoor shows us the rough side of non-violent leader Mohandas Gandhi, amusingly seen working out and getting gang tattoos in a British jail, through the eyes of fellow inmate Morgan Freeman (who else?). The sad story of the 1947 partition, through which 14 million people were displaced, eventually leads families like Mansoor’s to emigrate in search of a better future.

Kal Mansoor’s ambitious piece is worth seeing, and a necessary look at the often obscured history of exploitation. The falsity of the colonial narrative is clear from brilliant lines such as "it wasn't a third-world country when the British got there." Thanks to Rick Allen Wilson’s non-stop direction, Mansoor can have a conversation with himself as two hilariously miscast white actors playing Indian historical figures. But don’t laugh: Matthew McConaughey playing a subcontinental chief with a Texas accent is Hollywood’s forte.

A Brief History of Colonization is written and performed by Kal Mansoor. Directed by Rick Allen Wilson. Sound and Lighting Design by Christopher Leidenrost. Stage Manager is Padya Paramita.