Walls: A Play for Palestine 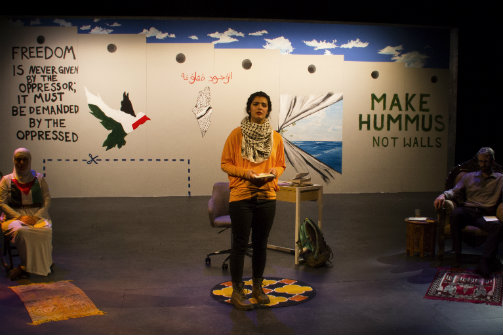 BOTTOM LINE: This ferocious new play tracks the history of Palestinian oppression through the eyes of a Palestinian-American teenager.

Fresh from The University of Tennessee, Walls: A Play for Palestine is the blazingly personal new play from Summer Ghasan Awad, a Knoxville native of Palestinian descent. Awad’s semi-autobiographical piece follows a nameless Palestinian-American “Diaspora Child” (Ellen Nikbakht), her tumultuous relationship with her authoritarian Muslim father (Anton Obeid), and the spirit of Mother Palestine herself (Ruba Thérèse Mansouri), a tortured female incarnation injured beyond recognition.

For its Fringe run, Walls benefits from bare-bones staging, commencing by inundating the audience in darkness with pro-Israeli soundbites from recent American administrations. Thus does Walls interweave the private with the political, tracking the broader reverberations of Palestinian suffering through a series of poetic meditations. Awad’s Diaspora Child speaks with ferocity of the daily struggles of those trapped in cultural limbo, neither quite American nor Palestinian, balancing a desperate desire for teenage normalcy with a profound longing for a displaced homeland. Complicating this yearning are the repressive aspects of Islam incarnated by her Baba, himself a complex web of geographical dislocation and buried tenderness. Our protagonist’s journey to cultural wholeness not only culminates in a voyage to her homeland, but also takes root in Mother Palestine, a lyrical embodiment of a nation in strife who dolefully narrates her lifetime of rape and resistance.

While Walls is mostly comprised of these three independent stories, their accounts have infrequent interjections by a series of outsiders—from menacing male nations to overeager love interests—all incarnated by the youthful and versatile Joey Odom. Yet Walls remains firmly fixed on Awad’s protagonist. In this role, Nikbakht is nothing short of breathtaking: a high-spirited and querulous young woman whose zeal never feels cloying or self-indulgent. As her Baba, Obeid is understated and sincere. Barefoot, serenely seated and sipping his tea, his unembellished delivery jarringly contrasts with Baba’s acts of surprising cruelty, making for a highly multifaceted characterization. While Mansouri’s somber pathos is phenomenal, she struggles with the necessary difficulty of embodying all Palestinian suffering.

Walls is a passionate treatise from a young playwright with enormous potential, balancing succinct dialogue with flights of effusion. Overwhelmingly however, the play’s use of anaphoric repetition grows tiring, and Awad’s ambitious project of counterpoising her personal history with a comprehensive account of modern Palestine results in a halting work that veers into reductive territory, condensing over a century of complex geopolitics in order to advance a singular narrative. Yet Awad’s play makes no apologies for being polemic and subjective. Walls intends to make ripples; it is a swelling storm in a tiny cup of sweetened tea.

Walls: A Play for Palestine is written is Summer Ghasan Awad. It is directed and sound designed by David Ratliff. The lighting designer is Josh Azoulay. Production Stage Management by Megan Webb. Graphic design by Julie Summers.