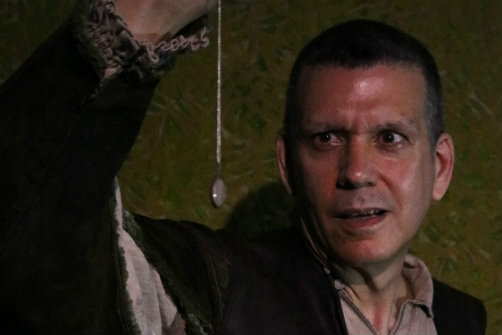 The Vampire’s Last Bite is a cheerful and skilled rendition of a young boy’s coming of age, in the far-off town of Puddlebump, behind the Stonewall Mountains. Nob’s world is inhabited by fairies, gnomes, elves—and yes, vampires. But blood-sucking fiends are only one of the obstacles Nob must face as he good-naturedly seeks his destiny (“a quest!” as one character says with delight). More “Jack and the Beanstalk” than Dracula, a single storyteller indulges in a simple tale of adventure.

Martin J. Flowers’ engaging performance of his own work shows why the old stories and songs must have been a treat around the fireside. His original script is playful and dramaturgically grounded; not only is Nob’s journey from childhood to maturity a well-structured story, it’s also well-informed by the old poetic style of traveling storytellers and balladeers. The sibilance, alliteration, and lack of sing-songy rhymes build on a long tradition of storytelling that just sounds good, in the Middle-English poetic style of Sir Gawain and the Green Knight and its forebears.

One quirk: behind the Stonewall Mountains, it can sometimes feel like everyone important and alive is a gay man. Underdeveloped women are a common problem for the fantasy adventure genre, and the abundance of queer characters in The Vampire’s Last Bite offer an improvement on normal genre standards, but a show leaning toward the progressive might have gone a little further to pleasantly surprise the femme adventurers in the audience.

The musical stylings of C. David Morrow provide an unobtrusive and pleasant backdrop, as do the lighting environments created by Jason Fok and the simple logs that serve as scenery. The costuming lends the fanciful air of the Renaissance Faire. There will be no surprises in terms of fantastical technical effects, but the pleasure of this well-spun yarn presents a very satisfying theatre experience for audiences of all ages.