The Curse of the Babywoman 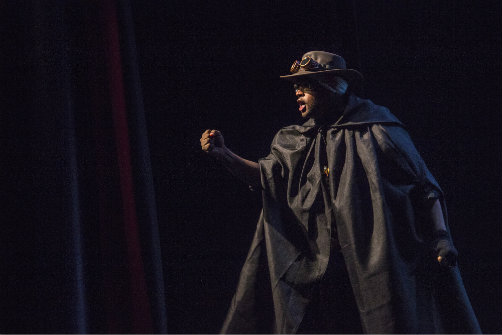 Justin Phillips in The Curse of the Babywoman. Photo by Hunter Pedane.

BOTTOM LINE: A rich piece that’s a great time, but its comedic energy is the real attraction.

First and foremost, The Curse of the Babywoman is pure fun. Looking at its title going into the show, I—a young millennial woman-human—was expecting a night of cursing my own generation’s stunted growth. Luckily, I was certainly shown otherwise in this sweet and quick comedy reminiscent of A Gentlemen’s Guide to Love and Murder and Monty Python, with a hint of Austin Powers.

Playwright Mike Wirsch (who also takes on the puppet design) provides a smooth, traditionally crafted narrative of Shrubtown’s greatest secret, and director Olivia Hartle provides wonderful staging for this quirky town. Shrubtown is outfitted in a comfortably familiar antebellum-y/steampunk-y aesthetic, but it also boasts a Bob’s Big Boy as its fine cuisine (one of my favorite jokes of the night—only something truly random can work so well). Francisco (Taylor Pedane), a “tourist of flightless birds,” has just arrived to town. Pedane, a fascinating actor to watch, plays Francisco with finesse. Soon Francisco finds that the people of Shrubtown are suffering an epidemic—some of the women are turning into babies at night!

The play is primarily a vehicle for its own silliness, which isn’t always a bad thing. But as Babywoman succeeds through its own humor, some jokes fall flat after we hear them too many times. Babywoman is a classic fish-out-of-water story: the townspeople constantly ask Francisco if he’s Chinese, as they find the name "Francisco" strange and therefore…Chinese. It’s later revealed that Francisco is in fact Korean. (Pedane is a white dude). This joke must pop up ten times, where three or four would more than suffice. It’s very clear that in this company of diverse actors (yay!), this laugh is not founded in any prejudice. But while the recurring gag is designed to aid the reveal that Francisco and his newfound love Philomena (Sarah Misch) are “outsiders…together,” this could have been apparent without focusing on Francisco’s ethnicity. Although I do appreciate the attention given to Francisco’s shady origins, for there really isn’t much of an explanation for his arrival to Shrubtown, other than for his bird-watching tourism—another recurring gag that is certainly overplayed.

Nevertheless, these details about Francisco in Shrubtown consistently land with a rousing round of laughter, and it’s apparent that BIG Theater Company is all about the details. Costuming by Sean Pollock is on point, and Ken Krupner's music recalls the delightfully old-fashioned melodramas of the early 1900s. I probably laughed the hardest at the choice to use nursery rhymes as tavern tunes for the adult set (sung hilariously by Alexandra Brown and Kurt Cruz), underlying how the infancy epidemic of the town permeates beyond the womenfolk. And when Francisco and the Shrubtown residents all partake in cocaine use “for the digestion,” Misch’s Pulp Fiction-y coke intake—which she snorts from a pretty necklace—is a nice touch. Misch plays Philomena with sweet purity, but also with sardonic vivaciousness—a great choice that layers her character very well. Shrubtown also has a resident Babywoman catcher, written with a nuance unique for a classic antagonist, and played with great energy (albeit at times a bit too much) by Justin Philips.

I'm thrilled that Wirsch pokes fun of his own creation by acknowledging the creepy quality of the notion of a "Babywoman": the night Francisco finds out that Philomena has been infected by the epidemic, he implores Silas (played with innocent cheekiness by Cruz) if he’s wrong to feel affection toward Philomena while she’s in baby mode. Silas evades the question, prompting a laugh that does somewhat confirm Francisco’s creepy affinity for this caretaker/caretakee relationship. But in its truth, The Curse of the Babywoman is that creepy and more, for the Babywoman creation is reflective of the familiar monsters in urban myths—unbelievable, and the source of all trouble.

BIG Theater Company’s last foray at Fringe was in 2014 with Destiny is Judd Nelson, a piece that featured many of the same company members. And their The Curse of the Babywoman is a delight: sweet and well-constructed, with distinctive humor as its best feature.