The Braggart of Bourbon St.

Written and Directed by Kevin P. Joyce
Produced by Dry with a Twist Theatrics
Part of the 2016 New York International Fringe Festival

Off Off Broadway, Play with Music
Runs through 8.26.16
VENUE #2: Flamboyan Theater at the Clemente, 107 Suffolk Street 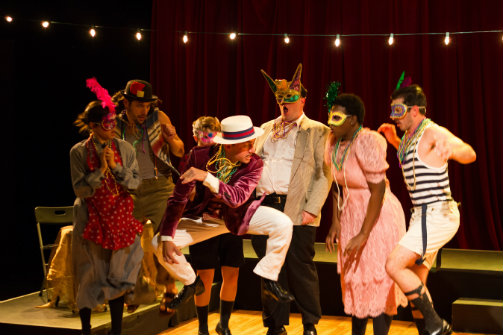 BOTTOM LINE: A captivating story of deceit, love, and mystery takes the audience on a fantastical and shocking journey through Mardi Gras in New Orleans.

The lights rise, the music starts, and energy explodes onto the stage as the cast of The Braggart of Bourbon St. creates the Mardi Gras atmosphere through extravagant celebration and dance, and the clown-like Leroy (played by Jonathan Weed Wexler) takes center stage to act as narrator.

Thus begins a story of mystery and madness, beginning with "professional player" Lyle DuTemp (Xavier Reminick) coming back to town for his father’s funeral only to bump heads with his stepmother, femme fatale Madame Delphine DuTemp (Ilaria Tarozzi), who it seems is dead set on taking his inheritance. At the same time, the delightfully lovelorn Sebastian (Christopher Lemieux), with the help of his friend Ambrose (Sarah E. Taylor), tries to win the hand of Zelda Bradshaw (Lourdes C. Mendez)—silently, as he is too nervous to speak. Chaos ensues when Lyle DuTemp sets his eyes on her as well, making the struggle to win her life both comical and tragic.

Zelda Bradshaw, like many other young ingenues, lives under lock and key of her father, Justice Bradshaw (Ivica Marc) who is determined to let no unworthy man so much as look at his daughter and her friend Ursula McKinnley (Tiffany Williams). Little does the Justice know, popular fighter Octavio Muscular (Ben Dawson) has a secret agenda regarding Ursula. Leroy weaves in and out of these love stories acting as narrator, incompetent messenger, and comic relief all while falling in love with the hardworking and straight-laced yet loving Nuala O’Doole (Shelby Rebecca Wong).

As The Braggart of Bourbon St. continues, plot development is interspersed with various song and dance numbers (including a bit with a hilarious group of showgirls played by Wong, Taylor and Lemieux) ensuring that the audience remains overjoyed as well as captivated for the duration. The complete devotion and superb character work from every member of the ensemble creates more than a story—together, they truly create their own world.

Somewhere between a clown show, comedy, love story and miraculous murder mystery, this production, brilliantly written, creates a modern Commedia with the power to completely transport observers and keep them constantly on their toes. The audience struggles along with the characters to decipher love from deceit, all while being wonderfully entertained. One of the best shows I've seen in a long time, The Braggart of Bourbon St. should appeal to a wide variety of people, and will hopefully have a life beyond this festival.