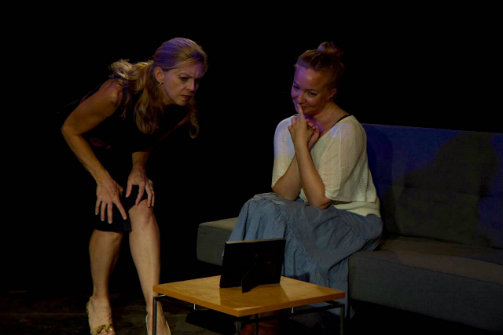 Jackie Sanders and Heli Sirviö in Remember Me. Photo by Alex Harris.

BOTTOM LINE: A moving play about two strangers, identity, friendship, memory, and dementia that is both humorous and heartbreaking.

Remember Me is making its U.S. debut at the 2016 New York Fringe Festival and is a soulful, moving play. Written by Finnish playwright Minna Nurmelin and translated by Eva Buchwald, Remember Me is one of the few international pieces at this year's Fringe, and the latest project by the Scandinavian American Theater Company (SATC), a company whose goal is to celebrate and collaborate with other writers and performers from the Scandinavian countries (Finland, Iceland, Norway, Sweden, and the Faroe Islands).

Remember Me is quirky. It's a play that explores a person’s identity, and what happens when this identity seems to be taken away. When someone is gone, who will remember them? Is life something to be documented, evaluated, mourned, or celebrated? This play answers those questions with a resounding, whole-hearted affirmation of life. Anna (Jackie Sanders) and Helena (Heli Sirviö) meet when they are both at a critical moment in their lives; Anna is contemplating her very uncertain and scary future, and Helena is looking to escape the pain as she looks at her past with regret.

Anna is a real estate agent tasked with selling Helena’s house. When they meet, Anna is at first unnerved and put off by her client, Helena, a photographer with a mysteriously absent husband. But as often happens with strangers, Anna and Helena find that they are able to share and discuss their struggles in ways that are difficult and sometimes impossible for family or friends. Anna comes to see that Helena is hiding her bewilderment and hurt under a strident veneer. If being divorced via text message is humiliating for Helena, sharing it with Anna somehow makes it less so; indeed, it can become comical. Helena confides how she eagerly photographed and documented her life with her husband at the beginning of their marriage; when they were in love and full of hope for their future. But now, she mourns, there is no “picture of where we ended” so she can see where it all went wrong.

Anna, sadly, is completely alone in the world, with no family and almost no friends. Slowly, Anna shares bits of her own life with Helena: her funny misadventures in internet dating, her lack of decisiveness...and, finally, her early-onset dementia (likely Alzheimer’s disease). Helena sees Anna’s dread and frustration as the aphasia makes it increasingly difficult for Anna to say what she means. And then Helena witnesses the difficult moments when Anna’s “hard drive” starts to fragment and she forgets who and where she is.

Director Drew O’Kane skillfully navigates us though the funny and tragic moments that make up the lives of these two different women, and Sanders and Sirviö both do a terrific job at handling the emotional moments and interior monologues in the play. The set is simple and sparse, and manages to convey both that Helena is ending one part of her life, and how Anna’s life is slipping away. At times the play itself seems to meander, but playwright Minna Nurmelin creates luminous and appealing characters and an engaging story. Hopefully, SATC will bring more of Nurmelin’s works to the U.S. In short, Remember Me is a  beautiful, wistful, and often funny play that I won’t soon forget.

Remember Me is by Minna Nurmelin. Directed by Drew O'Kane. Lighting Design is by Evan Kerr. Stage Manager is Siri Nerland.

The cast is Jackie Sanders and Heli Sirviö.