Poops, I Did It Again: True Tales of an Angry Colon

Off Off Broadway, Solo Show
Runs through 8.20.16
VENUE #4: Abrazo Interno at the Clemente, 107 Suffolk Street 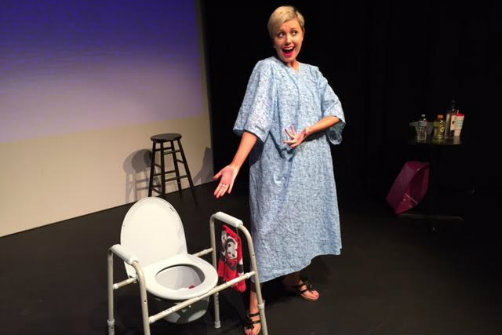 Brie Henderson in Poops, I Did It Again: True Tales of an Angry Colon. Photo by Anthony Auer.

BOTTOM LINE: Brie Henderson achieves the impossible with Poops, I Did It Again—stories about poop that are full of...hope?

Is it just me, or has poop become popular in the past years? Okay I know it’s not just me and we can totally blame the poopmoji for this one. Lucky for Brie Henderson, the writer, director and performer of this one-woman show, the poopmoji’s rise to power has helped pave the way for a show such as hers.

Brie starts her show with a truly horrifying story in which she poops her tights during the Broadway show Motown while seated next to her boyfriend’s mother. This is a living nightmare if you ask me. She goes on to tell story after terrible story of pooping in restaurants, cars, and once even in her cat’s litter box all because of a medical condition she has called ulcerative colitis. She describes horrible hospital stints and doctor appointments that she endures in order to find the root of her uncontrollable bowel issues.

Did I mention that this show is funny? Brie gets up there in a cute black and white polka-dot dress with a large pink flower in her hair and makes us laugh as she recounts what must have been some very low and uncomfortable points in her life. At times, I found myself worried about her and how she could possibly live a life so controlled by this terribly inconvenient disease. I couldn’t feel worried for too long though because soon enough, she’d have me laughing again with an impression of herself waddling to her car clutching her butt.

As the show goes on, it seems that there is no hope in sight. Brie would forever be on the lookout for the nearest bathroom and I would forever be grateful for my working colon. While the latter will still be true after this experience, Brie has found an answer to her problem. While I won’t give away what it is, I can truthfully say that I never thought I would feel so hopeful after hearing 55 minutes of poop jokes. This show reminds us that it only takes a little humor (and a lot of science and medical intervention) to make a sweet show about one brave lady’s experience with ulcerative colitis.

Poops, I Did It Again: True Tales of an Angry Colon is written, performed, and directed by Brie Henderson.