Written and Directed by Jerzy Zoń; Choreographed by Eryk Makohon
Produced by The KTO Theatre
Part of the 2016 New York International Fringe Festival

Off Off Broadway, Clown/Mask
Runs through 8.13.16
Various Locations 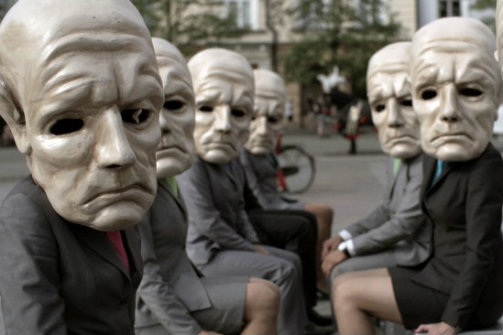 Members of the KTO Theatre in Peregrinus. Photo by Filip Rudnicki.

BOTTOM LINE: A piece of movement theatre devised in Kraków explores the boundaries between intimacy, power, and people.

Governor’s Island, Union Square, Fourth Street: what these parts of the city share is a site-specific performance piece by KTO Theatre. The company performs primarily in public spaces and has been touring shows since 1977 in over 40 countries. The three New York locations are all high-volume tourist areas—not necessarily where you would anticipate someone expecting to see Polish immersive theatre. Peregrinus, their most recent show, is devised around the peregrination (or journey) of people in 21st-century society.

The nine ensemble members enter the space dressed in formal gray suits—men wearing slacks and loafers, women in skirts and heels. All have watches. They pull behind them silver trunks on wheels and large hyper-masculine masks that are all identical and vaguely forlorn in appearance. In the opening beats of the performance, the actors line up, kneel before their masks, and simultaneously bow their heads down to meet the masks lying on the ground.

As soon as the performance begins, crowds gather. On Governor’s Island, many people biked by and either pushed through, stopped for a moment, or became so engaged with the piece they could not leave. In such public spaces, the ensemble performs for a demographic abnormal to the theatre. The ensemble does a tremendous job relating to their audience without language and keeping them visibly absorbed throughout the show.

For the next 30 minutes, the actors play a series of games on stage. For the most part, these games explore dynamics of power and gender performance. The members of the ensemble trade off as the dominant figure of the group, and the rest tend to fall into place seeking their approval. The small tableaux include physical representations of everyday situations, office settings and romantic pursuits, and more jarring games of roleplaying and hyper-sexuality.

The characters themselves go through extreme ranges of emotion with the same expression of exhaustion. The actors themselves embody the physicality of these characters tremendously and in full suits in the gross New York humidity. Eryk Makohon's choreography explores ranges of the real and illusory, exaggerating the mundane motions of daily life to create something entertaining, surprising, and sometimes unsettling.

For Peregrinus, script, music selection, and stage direction are by Jerzy Zoń. Stage movement and choreography are by Eryk Makohon. Mask concept is by Spitfire Company. Mask design is by Joanna Jaśko-Sroka.