My White Wife, or So I Married a Black Man 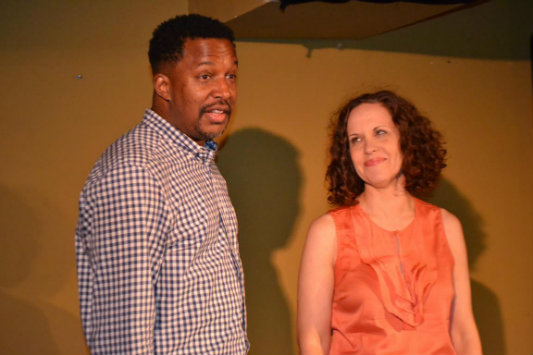 Rick Younger and Vanessa Shealy in My White Wife, or So I Married a Black Man. Photo by Hershey Miller.

BOTTOM LINE: A hysterically funny and insightful performance based on the real-life experiences of an interracial couple in the age of Obama.

The shoe-string budget shows of the NYC Fringe Festival usually pale in comparison to their opulent cousins uptown on Broadway. However, there are times when audience members are rewarded with a rare and unique performance whose brilliance dazzles just as brightly. My White Wife, or So I Married a Black Man is one of those remarkable productions.

Unless you’ve been living under a rock for the past few years, you’ve noticed that the topic of race and racial inequality has dominated all areas of contemporary society. From the rural Midwest to the Oval Office, discussion of race and privilege has sparked furious debate nationwide. This is why it is so refreshing to encounter two exceptional performers who live and breathe this topic every day, embracing their differing and shared life perspectives with candor, comedy, and love.

Through a series of shared scenes and monologues, the audience is introduced to the relationship of Rick Younger and Vanessa Shealy, starting at a teenage summer stock company where a determined Younger “mounted a love offensive,” to their married life in New York City (“after she straightened out my credit!”). Younger’s background in stand-up comedy has no doubt aided his ability to effectively deliver personal life experiences with incredible humor. Reminiscent of a young Dick Gregory, he is both hysterically funny and poignant in his remarks on race.

Shealy is noticeably less comfortable on stage; however, there is good reason for this. Like many, she had not recognized her own personal racial privilege until adulthood, and is uncomfortable identifying with those who share the same skin tone but have historically disenfranchised people that look like her husband and son. Nevertheless, Shealy delivers a compassionate and witty performance under the expert guidance of co-directors Melissa Attebery and Carl Foreman Jr. Especially moving is the raucous laughter heard from the wings while Shealy speaks; the support and pride radiating from her offstage husband is palpable.

Ultimately, Shealy and Younger shine brightest when they are onstage together. Their loving rapport and comic banter are deeply enchanting. It was no surprise when their curtain call ended to uproarious applause and a standing ovation. Whatever you do, do not miss this show!

My White Wife, or So I Married a Black Man is written and performed by Vanessa Shealy and Rick Younger. Directed by Melissa Attebery and Carl Foreman, Jr. Lighting Design is by Bob Franklin. Stage Manager is Elizabeth Ramsay.