By Thomas Tafero; Directed by Cailin Kless
Produced by Forget Me Not Productions
Part of the 2016 New York International Fringe Festival 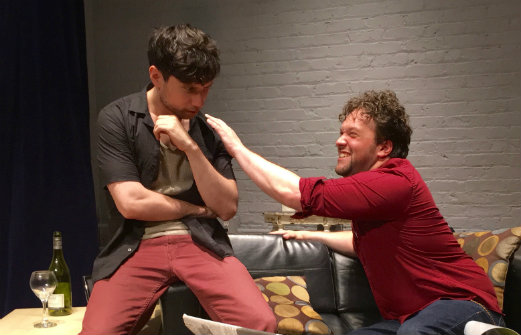 BOTTOM LINE: A tale of revenge between two "best friends."

Liars and Lovers is dedicated to the life and memory of its playwright Thomas Tafero, who passed away in 2013. At the performance I attended, it was difficult to ignore the energy in the room: Tafero’s Long Island friends and family filled the space, hugging and reminiscing, all here to see their loved one’s play. Watching the house as it filled, I felt a part of something unique: a downtown theatre crowd lacking an ounce of cynicism. Instead, the audience buzzed with anticipation to see Tafero’s play revived and, most importantly, to watch it together. Indeed, I felt witness to a beautiful testimony to this playwright’s community.

The play opens on a messy university apartment, napkins and pill bottles strewn about. Alex (Alexander Larkin) enters with a guitar case only to find Greg (Brian Nicholas Rossi) asleep on the floor behind the couch. These two characters and their unusual relationship are at the center of the action. They repeatedly refer to each other as "best friends" but nothing about their interactions will let us believe this lie. We quickly realize these roommates are living in a Sartre-esque hell—in which hell is "other people" and there is no clear way out of their co-dependency.

Alex and Greg have known each other their whole lives. That is not to say, however, that they are old friends. In fact, Alex was bullied by Greg throughout childhood and continues to live with the disturbing after-effects of Greg’s cruelty. Though it’s not clear at first why Alex would agree to allow his former torturer under his roof, a healthy dose of dramatic irony clues us into the fact that this is a classic case of keeping your friends close, and your enemies closer. Alex finds a great retaliation tactic when he starts messing with Greg’s girlfriend Cindy (Annalise Abar).

It's undeniable that this text is rough around the edges and would benefit from edits to address the occasional homophobia and sexism. Particularly, Cindy’s character rarely wavers from the stereotypical female trope: in need of saving, apologetic, polite, and willing to put up with abuse so long as it is soothed by a kiss and “you’re mine.” That being said, Abar does succeed in adding a mix of coolness and quirk to humanize the unforgiving character.

If the thought of bringing people together through theatre makes you happy, go see this play to experience its playwright’s community. Seriously—if Sartre is right and hell is other people, these are not the people he was talking about.

Liars and Lovers is by Thomas Tafero. Directed and Produced by Cailin Kless. Lighting Design is by Elizabeth Schweitzer. Fight Choreography is by Randall Rodriguez. Stage Manager is Jessica Schedlbauer.