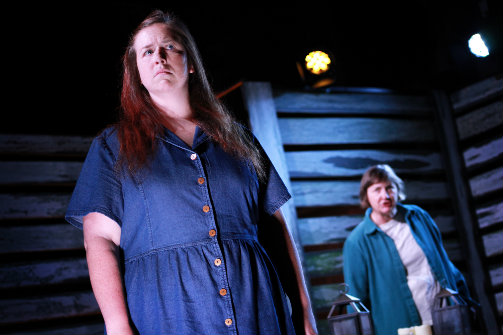 BOTTOM LINE: A chilling look into an Appalachian community bound by blood and tradition.

Deep in the hills of the Appalachian Mountains lies Kerrmoor, a town rooted in religious fervor and customs seemingly outdated by the rest of the U.S.—a town bound to a ritual in which blood must be spilt to restore balance and bring about social and economic peace. Chillingly illustrated by playwright Susan McCully, Kerrmoor is a solid entry into this year’s FringeNYC Festival.

McCully presents us with three women, each sharing a common connection to the blood rite. Agatha (Meg Kelly), a woman shunned by the community and cast out to live on the outskirts of town for her failed attempt in completing the ritual many years ago; her daughter Lorna (Katie Hileman), now chosen to sacrifice herself by the “seer”; and Kylie (Erin Hanratty), a young woman imbued with the powers of seeing the prophecy fulfilled, and knowing who the great Mona Kerr has chosen next in the line of ill-fated women. Toss in an appearance by playwright McCully as Elinor, Lorna's surrogate mother, and you have the full cast of this close-knit all-female ensemble.

What Kerrmoor does best sounds like a back handed compliment—it makes a lot out of nothing. Meaning, it’s the sort of show where not much happens, but there’s beauty in what’s given. As the mother-daughter leads Agatha and Lorna, Kelly and Hileman's nuanced performances give us two of the most wonderfully backwoods individuals possible. Their speech affectations, the ways in which they move through space, even the way they hold props throughout the play, have all been laboriously fine-tuned to give the most authentic presentation possible. Their commitment in exchanging and raising the energy between them is like an old steam engine slowly and surely building energy towards an explosive and satisfying end result.

Kerrmoor is very much a drama about the relationships between people, and about redemption, guilt, tradition, and destiny. As such, it does a fantastic job of giving it’s players text rich in dialogue that bolsters those central ideas. The added music and sound effects are also an effective touch. Supporting the idea of mass hysteria in the town over the upcoming ritual sacrifice, large crowds can be heard throughout, often chanting the name of their soon-to-be-slaughtered daughter. Also, particularly unsettling and poignant moments are punctuated by the sound of traditional chorus arrangements, in which the characters onstage often contribute their voices.

I wouldn’t attend Kerrmoor expecting a lavish, well-funded presentation; in its design elements, it's staunchly a fringe show. The costumes, while appropriately drab, seem ill-designed for their actors. The lighting cues are unfocused and often change at odd and inappropriate moments. The play’s conclusion is violent and significantly gory, and yet no effort is given to presenting any sort of effect: in moments of violence, we don’t observe any wear to the body or any blood spilt. Choosing not to include anything makes such moments comedic and wholly unbelievable. And yet no effort is made to indicate their absence is intentional, so instead our ability to suspend disbelief is put at an incredible strain. Ironically, the show’s description includes “…the bloody end,” and yet the stage remains as untarnished as it began.

Budgetary concerns aside, Kerrmoor is a well-performed piece with an intriguing premise. It’s often easy to forget that people like those in McCully’s piece might exist, but luckily we have productions like this one to remind us that the human condition comes in all sorts of shapes, sizes, beliefs, and varying levels of crazy.

Kerrmoor is by Susan McCully. Directed by Eve Muson. Fight Direction is by John Bellomo. Set Design is by Gregg Schraven. Lighting Design is by Adam Mendelson. Sound Design is by Patrick Calhoun. Costume Design is by Eric Abele. Music Composition is by Linda Dusman. Stage Manager is Brady Whealton.