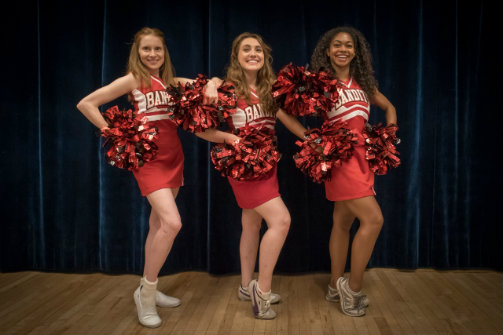 BOTTOM LINE: Hysterical! bravely tackles social issues, in the lives of modern American teenagers, through the use of cheer and exceptional comedic timing.

Life in high school can be hard, especially when you are a young woman trying to keep up her grades and do your best to bring your cheer squad to victory. Hysterical! follows the lives of five teenagers: Mia (Samantha Debicki), Maddie (Roxy Reynolds), Charlotte (Nadia Brown), Madison (Miranda Noelle Wilson), and Shannon (Hayley Beauregard), trying to do just that. Some of the members of the Bandits cheer squad come down with an unidentifiable social disease which disrupts their plans for a victory-filled year.

I must admit that Hysterical! was not the play that I expected. Sure, it deals with hysteria among teenage girls, which is an often serious and mysterious phenomenon, yet somehow I was surprised by the incredibly powerful and moving moments embedded within this show. For example, while it would be too much of a spoiler to describe the subject matter of Charlotte's monologue, Brown masterfully portrays the inner struggles of a strong yet silenced woman while maintaining the integrity needed when dealing with such heavy subject matter. Reynolds also deserves mention for bringing a youthful innocence to the production; one could easily fall in love with her endearing nature and well-crafted comedic timing.

Cheers are cleverly used within the piece, much the same way songs are used in musicals: the cheers provide insight into the emotional landscape of the characters, and also advance the plot, letting the audience know how much time has passed and what has happened within that time frame. It's also an enjoyable theatrical device, adding lightness while maintaining the theme of the show and identity of the characters throughout.

The interplay between the comedy and the harsh realities of the social issues within Hysterical! create a well-established balance, but there are moments in the first half of the production that could be tightened up in terms of staging. The show is also a little long to not have an intermission. However, Hysterical! is a fun night out dealing with forgotten but necessary themes in new ways. I'm excited about the future of this production, which has the potential to be truly powerful.