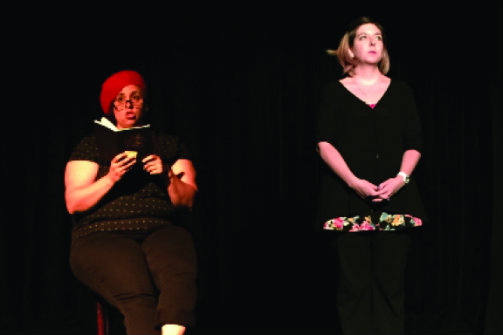 BOTTOM LINE: GIRLish is a funny, high-energy sketch comedy revue that explores the highs and lows of being a woman with smart sincerity and a lot of variety.

Mixing several short sketch scenes with musical numbers, poetry(ish), and dance breaks. GIRLish brings an honest hilarity to the trials of being a woman. Fans of Broad City and Garfunkel and Oates will feel right at home in this fast-paced, witty variety show.

GIRLish takes the form of a cabaret-style revue. In the opening musical number, performers Alex Bellisle and Stephanie Anderson enter as two “good fairies,” promising their future selves that “with a dash of awkward and a sprinkle of lady/with a twinkle and a twist, you’ll be Girl…ish.” And the two certainly deliver, moving through wild scenes that point out the absurdity of gender expectations with a snappy, clap-back wit. The show is semi-autobiographical, and combines the performers’ personal stories with all-too-familiar shared experiences among women. Catcalling, workplace harassment, family dynamics, and a smorgasbord of sexcapades all make an appearance. The cast and crew’s pedigree in Chicago’s world-famous improv scene is clear. The sketch style and quick pacing shows off the team’s Second City writing chops, and the cast demonstrates their performance range by incorporating short and long-form improv. GIRLish plays out in a series of semi-connected scenes rather than a central plot, but the girl power is strong throughout and the jokes never stop.

Each performer’s unique experience comes through across multiple scenes. Stephanie Anderson’s characters maintain a Sex and the City-gone-wrong vibe, though her performance adds realness and depth to character tropes that sometimes border on stereotypical. Alex Bellisle’s perspective is particularly refreshing, focusing on her experiences as a lesbian woman in sex and love with an acerbic honesty that brings levity to often-overplayed themes. In a series of Beat-poetry-style monologues Bellisle offers an uproarious take-down of scissoring, dead bedrooms, and other lesbian stereotypes with a deadpan that is a highlight of the performance.

The production is a perfect fit for the cabaret environment of the Huron Club, and GIRLish’s production team makes excellent use of the space. Expect audience participation as Anderson and Bellisle perform skits in the house, across the room, and at one point ask the audience for suggestions (in classic improv style) upon transforming the space into a lesbian bar. The production elements are simple and well-executed, punctuated with a variety of props that lend a toybox feel to the show.

Of course, no revue would be complete without a few song and dance numbers, and composer Mary Mahoney delivers a variety of tunes in a short time, including an impressive hip-hop number from Anderson about teaching kindergarten. Fitting the sketch style, the songs are simple and the singing execution is not perfect, but the music is a solid framework for many of the funniest jokes in the show. The only male presence in the production, music director Fima Chupakhin, fits in as the classic cabaret piano man.

GIRLish is short, and because there is so much packed in, it can feel scattered at times. It’s sometimes difficult to find the thread between scenes as the duo moves lightning-fast between Southern belles and kindergarten teachers, Mary Poppins and mental health workers, but the jokes are sharp and the energy never drops. Overall, the sincerity of the show and the tight chemistry of Bellisle and Anderson make for a solid, upbeat revue. Feminist-ish, empowering-ish, poignant-ish, GIRLish is quick, clever, and fun.