From Foster Care to Fabulous 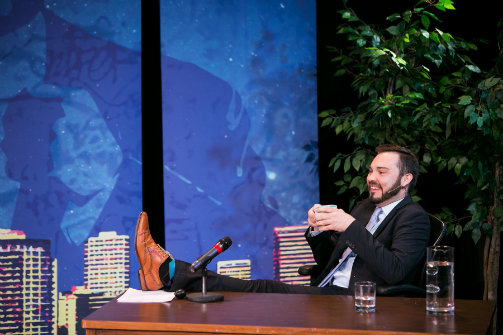 Patrick Burns in From Foster Care to Fabulous. Photo by Genevieve Fridley.

BOTTOM LINE: From Foster Care to Fabulous, though rough in certain areas, is a heartbreaking, hysterical, and winsome portrayal of one teen’s formative years in a system that, contrary to popular belief, was not always looking out for him.

What do the ridiculousness of a Jamba Juice jazz number, a “mastermind cow murderess,” and a band called Lesbian Cheeto Casserole have in common? A couple things. One: they are all featured in Patrick Burns’ new solo show. Two: their laugh-out-loud absurdity does not begin to compare to the absurdity of the American foster care system, into which Burns invites us for a little over an hour in From Foster Care to Fabulous.

I tend to be nervous and a little bit skeptical about seeing solo shows about one man’s plights on the downtown theatre scene. How many times do we need to watch somebody self-indulgently tell their life story before we ultimately get tired of it? However, Burns’ witty and creative portrayal of his journey through foster care in Central California is a refreshing surprise, and—what is more—a hilarious, sincere, and very relevant exposé of a system that does not get much attention in the musical theatre world.

The show is set up as a spoof of a late night talk show: Burns arrives onstage to uproarious applause as a live band plays an upbeat jingle of what might be termed “flabby jazz” (you know, not that tight, toned, rhythmic jazz, the kind that’s got a little less structure, a little more flab: flabby jazz.). Following a few minutes of only slightly awkward banter with the audience and band, Burns jumps into the journey—dotted with tongue-in-cheek musical theatre numbers—of how he went from foster care to fabulous.

Using charming, theme-song-endowed talk show segments such as “Fanmail”—in which Burns receives often apologetic letters from his father, who was in and out of jail for all of Burns’ childhood—and “Where the f**k am I gonna live?”—in which Burns interviews potential foster parents—he keeps things interesting. He finds a distinct voice for each character he portrays, and by the end we feel as if we know each one closely and personally. His performance is never one-note, and neither are his methods of relaying information.

Though Burns’ work does need a bit of fine-tuning—from the number of false endings the show has to his clear nervousness in certain parts—all in all, Burns is onto something good. The tracing of his relationships with the many crazy characters a child is likely to encounter “in the system” is nuanced and specific to his own experience, but the amount of sincerity and heart that exists in the show is sure to spark empathy and a personal connection in all of us.