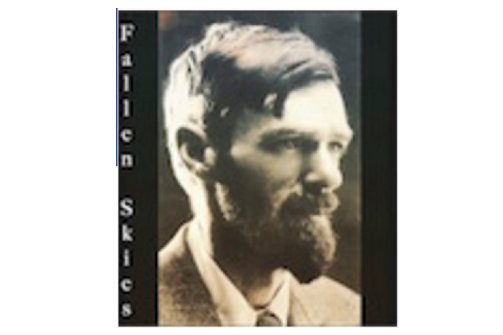 BOTTOM LINE: A sumptuous, short contemplative musical about writer D.H. Lawrence and his affair with Frieda. If you are familiar with Lawrence’s work, you will be intrigued.

I am well versed in Lawrence’s work, but I fear that if you are not, you might get lost. In short; Frieda Weekley left her husband and three children in 1912 to be with D.H. Lawrence, a poet and writer who became notorious for what, in his time, were considered pornographic stories and poems. Matthew Lowy conceived and composed Fallen Skies, and his music is rich and opulent. This classical and almost operatic musical is a meditation on part of D.H. Lawrence’s life, specifically his relationship with Frieda, the woman who later became his wife. Most, if not all, of the text is written or adapted from Lawrence himself, with contributions from Frieda Lawrence, James Douglas, Ezra Pound, Herbert Muskett, and Sir John Dickenson.

Lawrence and Frieda have a tumultuous and fiery relationship from the start, which Lowy deftly communicates in the music. Lawrence (Andrew Tighe) and Frieda (Catalina Gaglioti) sing their hearts out as they passionately fight and make-up time and time again. Sarah Cetulo and Allyn Hunt play multiple characters; Cetulo is Miriam; Felice, one of Lawrence's students; an Italian maid; and writer Katherine Mansfield. When Lawrence leaves Miriam, Cetulo is stirring as she sings about his abandonment; it is a lovely song, and one of the strongest of the production. Allyn Hunt also stands out as Frieda’s bewildered husband. As Frieda starts to regret her decisions, Lawrence bitterly tries to convince her to stay.

Lowy’s orchestra is excellent, with Lowy on the piano, Tim Abbot playing woodwinds, Midori Yamamoto on the violin, and Tao Guthrie on bass. Their music comes through the backstage curtain and is otherworldly and haunting. Lowy’s imagination and devotion to his project is clearly evident as he works to bring Lawrence’s language to musical life.

Unfortunately, the piece suffers from a lack of cohesion; at times it feels like a set of loosely connected songs instead of a full story. While the songs themselves are beautiful, the plot is not entirely made clear, and often the supporting characters are not identified. Julia Gannon does a good job directing her actors, but the piece itself feels bare and unfinished, as if another act is missing. While the music is moving, the characters themselves seem to be sketched out, instead of fully realized, and Lowy’s ending is enigmatic and abrupt. Those who know the full history of Frieda and Lawrence’s life know what happens next, but those who are not may be left puzzled. Perhaps another act, further detailing Lawrence and Frieda’s relationship, would benefit the piece and give us more insight into the world Lawrence lived in. Lawrence had other personal and professional challenges, which also challenged his relationship with Frieda. Exploring those, I think, would bring this musical to a more vivid life.