Eve and Her Neighbors 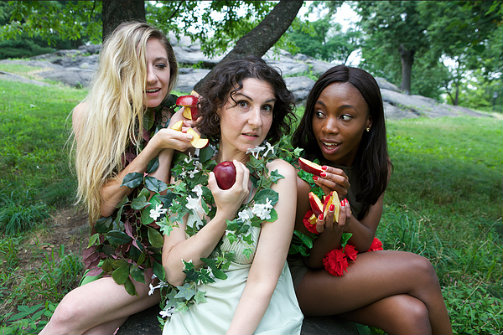 BOTTOM LINE: Frustrated with Adam and encouraged by unexpected visitors, a headstrong Eve seeks life outside the Garden.

The Biblical character of Eve has fascinated scholars, theologians, and feminists for millennia. Was she the original sinner and the betrayer of humanity, or the victim of a centuries-long smear campaign? Eve And Her Neighbors takes the latter view, as the discovery of new humans leads a strong-minded Eve to question her place in the world and strike out beyond the Garden’s walls.

As Eve begins, the shrieks of two young women jolt its heroine (Eva Marie Mastrangelo) from her daily gardening. The starstruck newcomers scale Eden’s fence and introduce themselves as the “un-original women” Shirley (Lauren Gray) and Doreen (Alverneq Lindsay). God, they elaborate, kept creating new humans after making the first pair, but refused to let them mingle until certain that Adam and Eve were perfect. Undeterred, Shirley and Doreen have arrived to view the Garden and meet its famous residents.

However, it’s rapidly revealed that Eden is no paradise for its lone female: subject to endless toil, devalued as little more than Adam’s “helper,” and constantly gaslit for her complaints, Eve is now at her breaking point. A baffled Shirley and Doreen rush to Eve’s defense, encouraging their new friend to stand up for herself and flee her constricting circumstances. Eve is quickly enthralled with their tales of life on the outside: the other women freely explore the world, pursue their interests and passions, and enjoy unheard-of equality with their mates John and Marcus. Emboldened by these stories and a newfound sense of validation, Eve makes up her mind to leave—but God (Adam Feingold) refuses to let His headstrong creation go without consequence.

Eve is meant to satirize the Creation story, and author-director Ruby Hutson-Ellenberg succeeds in building an Eden more ridiculous than paradisiacal. Thick-skulled, immature, and overconfident, Aaron Spark’s Adam hits every stereotype of male privilege. Feingold’s voice-over God is similarly maddening, meeting Eve’s arguments with patriarchal condescension and her ultimatum with petty revenge. We wonder why Eve didn’t depart sooner, and a little more effort to show Paradise’s appeal might have created some interesting dramatic tension. Likewise, with the story’s Serpent only mentioned in passing, Eve’s neighbors become her de facto tempters; it’s easy to see how this lonely, frustrated woman would crave the empathy and promise they offer. Given Shirley and Doreen’s unquestioning reiteration of Eve’s sentiments, and the story’s loose explanation for the existence of other humans, we may wonder whether these neighbors have been sent to derail Eve, or are just figments of her imagination.

Eve sets up a plot rife with issues of gender parity, free will, and self-definition, but never quite gives these themes their full due. However, by highlighting this well-known tale's all-too-familiar flavors of sexism and power dynamics, Hutson-Ellenberg invites us to consider Eve’s side of the story. Perhaps she was, as the bumper sticker posits, framed.