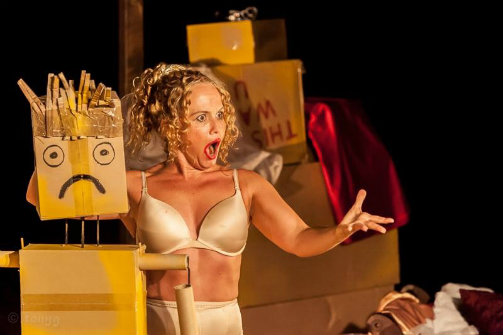 BOTTOM LINE: An ex-diva has been too haunted by her past demons to leave her apartment, and today’s the day that changes.

Grey Gardens for one! In Tiffany Barton’s one-woman show, we live a day in the life of June—an agoraphobic ex-opera diva. This day is a special one, for it’s the day she goes outside! (Maybe!)

June had it all: the opera career, the husband, and the fame...until her marriage turned sour underneath her success, then the career fell apart, and her past demons (her toxic mother, her absent father) began to haunt her. But the setup of DIVA, directed by Helen Doig with great passion for detail, provides us with the possibility that June has never been an opera diva. Perhaps it’s all in her dark, cloudy mind, a fantasy she conjures up as a coping mechanism.

I’m impressed with Barton’s sense of structure. Doig and Barton have created June’s whirlwind of a life, reminiscent of Who’s Afraid of Virginia Woolf and the aforementioned Grey Gardens. Barton is able to harness a world tipped on its head where her protagonist can ask the Passover question—"Why is this night different from all other nights?" Why on this day does June want to go outside?

Yet Barton’s ability to paint a clear picture of her character is overshadowed by June’s emotional weight. Barton and Doig make great strides to make their audience feel heartbroken with their agoraphobic, sexualized, and truly sad Diva. But instead of feeling heartbroken with June, I felt too removed watching June spiral to feel much of anything. June may be written to be this unabashed, brutally honest piece of work, but I was just too overwhelmed by June as a character.

Barton overacted to an extreme level, and the play—while mostly structurally sound—becomes an experiment in finding out what crazy thing Crazy June can do for an hour. A lot of June’s antics seem to be cop-outs of how Barton believes “crazy women” behave. She attributes June’s problems to her absent father, and cries out to him in these trite moments that separate her reality, bordering on a parody of itself.

DIVA is a debaucherous exhibition of a woman’s ailing state of being. I appreciate the efforts it took to create this heartbroken June, but DIVA did not instill a mutual heartbreak with me.

DIVA is written and performed by Tiffany Barton. Directed by Helen Doig. Set, Props, and Costume Design are by Cherie Hewson. Sound Design is by Max Porotto. Operatic Vocals by Lucy Byers.