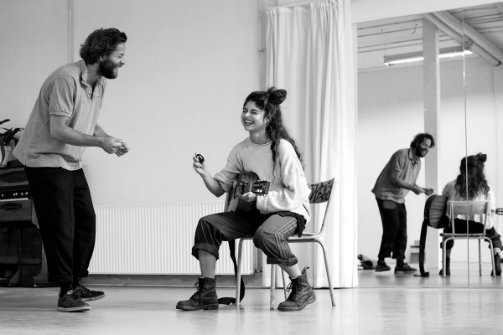 DAD is unlike many well-known shows in New York City, and that's a good thing. After all, DAD is a part of the New York International Fringe Festival, and fringe theatre is meant to be different from the lavish playhouses uptown on Broadway. It's meant to rebel against the status quo. Its mission lies in celebrating unique and experimental artists. In that way, Danish artist Christian Gade Bjerrum might as well be the poster child for fringe theatre.

Audience members might well be surprised when greeted with the request to remove their shoes before entering a dimly lit space, where a beautiful young woman gently strums a guitar. After taking a seat among the circle of chairs, a handsome tanned man with wild hair enters wearing nothing but a Speedo bathing suit. He introduces himself as Christian and speaks of his love for Mexico and its beaches, while ushering the audience to their feet so he may begin to teach yoga. No, really. The entire audience begins doing yoga. Bjerrum reluctantly dismisses the "class" when he must make his way back to Denmark during the Christmas holidays, where he learns the terrible news. His father has cancer.

What follows this announcement is an explosion of music, projection, spoken word, performance art and multimedia. The pace between scenes is frantic as Bjerrum's monologues veer from the cheerful to the deranged. And why not? A cancer diagnosis often invokes a certain madness brought on from sorrow and fear. At the performance I saw, everyone in the room could relate because they all (evident by a show of hands) knew someone who died, or is dying, of cancer.

Normally it wouldn't be a surprise if some audience members didn't fully participate with a production like this, but this was not the case with DAD. The reason for this is Christian Gade Bjerrum. From the moment this charismatic and wacky bohemian steps on to the stage, he has everyone's full attention. He is one of those rare people who excitedly embraces a room of strangers and sets them completely at ease with his effervescent personality and infectious joy. He's that kind of performer you can't take your eyes off, one who makes you eager to join in. Yet while most of Bjerrum’s multi-art styles work well, there are some moments when his attempts come off as superfluous. A performer like Bjerrum needs no experimental gimmicks when his personality and charisma already shine so brightly.

Accompanying Bjerrum is a captivating singer and guitarist, Malika Sia Graff. Her beautiful voice alone is worth the price of admission, and her stirring compositions set the tone for each stop on Bjerrum's expedition. It's astonishing to discover (from the program) that such talent and accomplishments come from someone who is only sixteen years old.

Bjerrum's journey shows that grief can take many forms. It can be an angry man interrupting oncologists and preaching alternative medicine. It can be a gentle introspection which turns into a maniacal harangue. It can be an optimistic son leading a room of people to dance and sing. It is a perfect example of fringe theater: quirky, experimental, and wholly unique.