THIS SHOW IS PART OF FRINGE ENCORES, PLAYING AT SOHO PLAYHOUSE FROM 9.19 to 10.1.
FOR TICKETS AND MORE INFO VISIT sohoplayhouse.com. 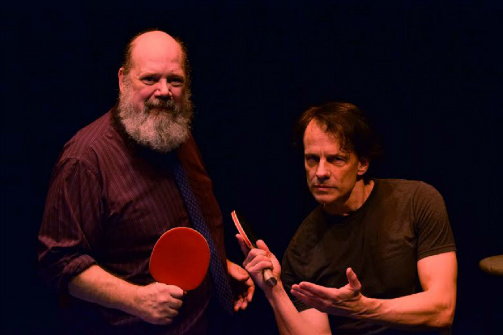 “Ding!” Gus (John Ahlin) has a look of confusion and curiosity on his face as Chip (Christopher Patrick Mullen) glances down at his phone. They continue their game of ping pong. “Ding!” Chip turns away from the table, seethes a bit, and texts a reply. The ping pong grounds the actors in their reality—they are in the back room of a bar in upstate New York. And the ping pong game continues. A real game of ping pong. Throughout the entire performance. What a genius idea.

Not only are the ping pong balls and paddles incorporated into the action, they are a part of the dialogue as well. They even have names: “Otto” and “The Sphere of Fear.” What is so delightful about the live ping pong match is how it adds to the comedy. Clearly not all of the errors or successful backhands are planned, but Mullen and Ahlin truly live in the world of this show. They take full advantage of the mishaps and winning shots to develop each and every happy accident into a bit or punctuation to emphasize a point.

Mullen plays Chip. Well, he embodies Chip. He is Chip. Mullen is a delight as his music professor character bounces ideas back and forth with Gus. As Dr. Gus Reisman, Ahlin is spectacular. The control of his character's mannerisms and the way he is able to speak volumes with a single intake of breath is fascinating. Whether speaking a mile a minute or pausing in silence, Ahlin captivates. The tiny nuances of thought that Mullen and Ahlin share are simultaneously entertaining and thought-provoking. Perhaps their ease of executing this comedy is a result of having written and directed the show themselves. Whereas the lack of an outside perspective can often be detrimental, it's quite the opposite here. This insightful comedy incorporates witty banter with philosophical humor.

The ridiculous yet clever ideas sewn into the dialogue are wonderful. For example, in his concept of “wisdom seeds,” Gus believes he is improving the world by loudly professing what he thinks are unique and brilliant ideas in the hope that someone might overhear him and bring the idea to fruition. Chip rolls his eyes at Gus and uses his own wit for a mocking rebuttal. By reminiscing over their former students and official ping pong tournaments past, these characters attempt to make it through the present day with their hidden turmoils. This monthly ping pong game seems cathartic, but also brings old pain to the table. Luckily, both men surprise themselves with their own wit and humor as they quibble back and forth and profess that “Basement ping pong is heaven.”

The cast is John Ahlin and Christopher Patrick Mullen.