By the Ensemble; Directed by Zachary Saffa
Produced by Newborns Theater Troupe
Part of the 2016 New York International Fringe Festival 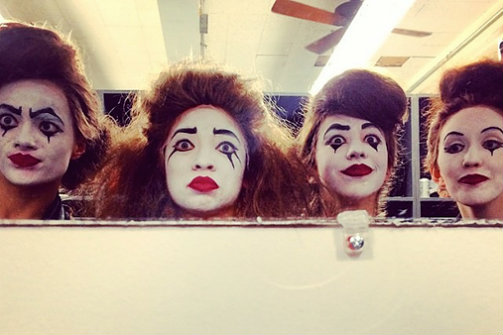 The cast of BORN.

BOTTOM LINE: BORN pulls you in, both literally and metaphorically, and smothers you with endless joy and curiosity as you watch four red-nosed ladies discover themselves and each other.

Coming to BORN without much knowledge of clowning, I did not have any pre-conceived notions or expectations of what I was about to see. On the stage are two closed doors and a few blocks that serve as "walls." A piano stands to one side, hinting that it will be played during the show. The first clown, BOOM (Meaghan K. Smith), awakes from a stupor, smiles at the audience, and explores her surroundings. She puts her finger on one of the doorknobs—first attempt at contact—and sure enough, the MUZE (Zachary Saffa) responds with the first note.

In the following segments of the show, each of the clowns is introduced with a distinct theme, melody, and physicality. Each one of the four is a reflection, opposition, ally, comrade, and companion to the others. They explore individually as well as together in a mysterious, heightened universe to discover their identities, what they symbolize to each other, and the metaphorical unknown. Director Zachary Saffa improvises on the piano and plays variations on familiar tunes to create a sense of different characterizations.

The ensemble masterfully portrays their individual characteristics: BOOM’s mischievous innocence and endless curiosity, which push the story along; TANK (Adelaide Lummis), with a scary appearance and yearning for companionship; the ethereal and optimistic TRUE (Emma Coulter); and SPLA (Jasmine Stiefel), quirky and awkward, yet courageous. The four, who represent many different archetypes, are hilarious but nevertheless moving. The show is a presentation of human vulnerability, and the effort required when we attempt to form meaningful connections with one another.

As the four finally break through the barrier between the illusion and self-awareness, one by one, they ultimately end up on the same side, and become bare in front of the audience. There isn’t a single word uttered during the entire show, aside from some necessary vocalizations to help suggest certain objects or actions—for instance, snores. Words are unnecessary when movements suffice in telling the story.

BORN does not try to make a grandiose claim of solving the “hard problems” in life, or to intellectualize the existential questions the ensemble clearly makes continuous attempts to explore. Instead, these four clowns offer their vulnerability and perform in the most basic form of storytelling. It is refreshing to see something of so much depth conveyed with effortless simplicity.