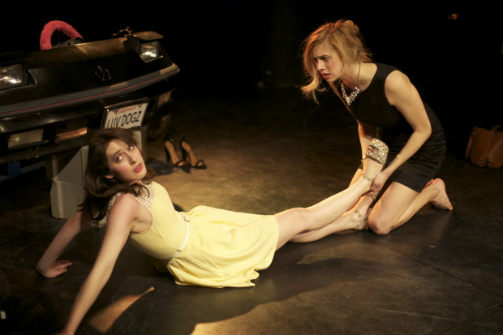 BOTTOM LINE: A must-see comedy that is smart, earnest, and compelling.

Any theater nerd like myself will walk into this show like a detective, hunting for parallels between this modern day, all women production and the absurdist comedy from which it draws its inspiration: Beckett’s Waiting for Godot. Said nerds will not be disappointed—Estragon becomes Estella, Vladimir Valerie, and the ever-elusive Godot translates to the unusually slow roadside assistance company that you may have had the pleasure to hate. Quick and witty dialogue between an unlikely friend pair soon has the audience tittering; type-A Valerie (Victoria Ratermanis) becomes doubly anxious alongside the sedate(d)-and-strange Estella (Liz Galalis). The actors have a chemistry that they lean into more and more as the play progresses, so that by the end we really feel the weight of the Nevada desert on their characters’ shoulders, and of the journey their friendship has taken by simply being forced to wait together.

So, too, does the reality of their dire situation become increasingly embodied as time passes: nice dresses are replaced by pajamas, skin becomes sunburnt and dirty. As hopes of making it back to college graduation after a Las Vegas trip recede, Valerie and Estella oscillate between driving each other crazy, and investigating their personal fears, traumas, and difficulties with one another.

An odd visit (a la Pozzo and Lucky) occurs in Act Two by the raucously entertaining Polly (Briana Harmon)—a woman distinctly not of the same ilk as Estella and Valerie (think: wears all pink and platform shoes, with Barbie doll-heads in the heels). Her presence breathes life into the show, shaking up the dynamic between the two friends and inadvertently forcing feminist issues to the forefront. And though the discussion fails to get beyond typical heteronormative hot buttons—slut-shaming, birth control, the mysterious beast that is the female orgasm—the dialogue is hilarious and heartfelt, and covers topics still too often left unaddressed.

By the end of their static journey, I was extraordinarily endeared to these characters. I was also left wondering: does this show’s commitment to reworking an original work ultimately prevent it from coming into its own? Does this play take Godot as a platform to jump off to its own genuine style, world, life; or does it use the name and plot structure as a support beam that functions equally as a crutch? Regardless, I hope you go and decide for yourselves, and have a sidesplitting good time in the process.