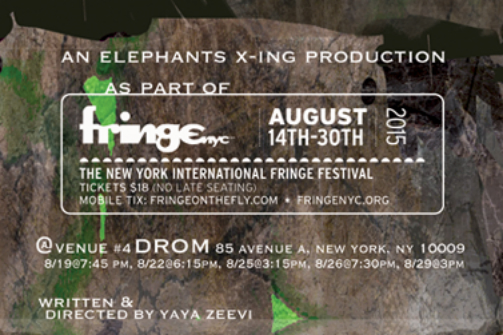 BOTTOM LINE: Part dissection of colonization and patriarchy and part Planet Earth, Virtuous Monsters is an intriguing look at the humane nature of animals and the animalistic nature of humans.

The animals slumber as patrons take their seats, and when the lights go down, the beasts awake. The animals, of course, are actors, but their physicality is so convincing you’d wonder otherwise. Yaya (Yael) Zeevi’s Virtuous Monsters is a poetic (though sometimes unfocused) criticism of globalization and meditation on heritage.

Set in the plains of Eastern Africa, the warm lights and earth-toned set create a desolate and arid environment where animals seek refuge and colonists seek opportunity. Three pairs of fathers and children from different parts of the globe tell a timeless story of patriarchs trying to pass on traditions and their offspring desiring to start their lives anew.

Mark (Christopher Wharton) oversees the territory but is clearly an unwelcome outsider: a white settler who usurps land, most likely in an effort to make his son’s life richer and easier. Wharton seemed unsure in his opening monologue, but his performance intensified as he verbally sparred with his son Matthew (an impressive Matthew Stannah). Soon Dinah (Alice Van Heuven) retreats to the plains where she meets the lust-driven Matthew and Kolkerra (Robert Vail). These three young actors move exquisitely as they demonstrate shifting power dynamics, and Vail’s limber mating display is the highlight of the show.

However, the script often does not keep up with the actors’ dazzling movement. With only a 45-minute run time it seems nearly impossible to flesh out all six characters’ relationships. Muddled dialogue—not a fault of the actors’ accents but instead an issue of volume—made certain scenes unintelligible. Still, when the children have overlapping arguments with their fathers, Zeevi’s language soars. The sex-driven animals evolve into upright humans as the play progresses. It seems, as hunters offer animals water and beasts use tribe leaders’ thighs as pillows, that the two species may not be so different in their desires and struggles. “Your bones crack too,” Dinah tells her father.