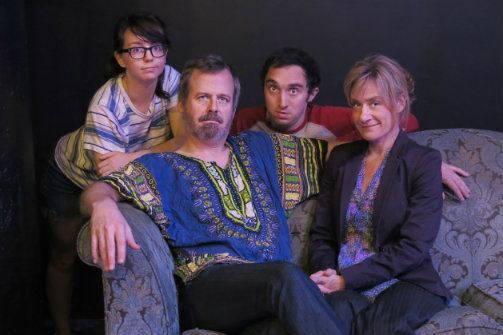 BOTTOM LINE: Human, funky, and fresh, Verano Place rises above the “coming-of-age” genre and reminds us that growing up is a process that never ends.

I’m always wary of “coming-of-age” stories. That double hyphenate tends to be laced with lessons learned, trite encounters with adversity, and the worst: a grown adult attempting to write believable dialogue for children. But Katie Atcheson’s Verano Place dispels all of those fears.

From the very beginning, director Josh Hecht whisks away our expectations of a living room drama by dismantling the unmistakably orange 70s furniture with a lively transition by the cast. A couple of afros glow around the edges in the dim light, funky swaggers and mincing struts flowing through the space to create a bus station, where we first meet Marcelle (Jessica Brown) and Emily (Chet Siegel). What follows is not an ordinary coming-of-age story. It’s the painfully honest story of the difference between becoming an adult and behaving like an adult.

With quick-paced scenes and snappy dialogue, the nuclear family structure is dismantled as quickly as the furniture. The deliriously dramatic father (played with revelry by Bradford Cover) traipses through the scenes, wreaking havoc on the family’s stability until he is down to his underwear throwing a tantrum. The overwrought mother (Helen Coxe) attempts to balance her rigid British background and career ambitions in her atypical California home. The ten-year-old son (a challenge, but ultimately pulled off well by Will Dagger) has all the concerns of a ten-year-old. And at the heart of the play, thirteen-year-old Emily (played exquisitely by Siegel), who loves softball and has never had a boyfriend, attempts to understand where she fits in.

The play shows a constant battle between the intellectual and the literal. At one point, Cover storms around the stage screaming in vain for legal pads and a pen to capture his inspiration. Emily’s imagination of what it means to grow up is pummeled into new shapes by the words and actions of her confident, sensuous friend Marcelle, the smooth-talking Chris (Samuel Stricklen), and the sweet, bumbling Dobbie (William Sturdivant). Though Emily is theoretically the one growing up and changing, she swiftly encounters the demands of being the lone piece of stability in a hectic play.

Siegel’s friendly, forthcoming, and troubled portrayal of Emily was infinitely relatable, heartbreakingly claiming, “I’m not brave, though, mom, and I’m not a grownup.” Her approach to adulthood is murky and often out of her control, accented by the production’s masterful sound design, which dominates the actors throughout the play: pouring drinks for them, chopping vegetables for them, and setting a sitcom-like 70s track through every transition, forcing them to keep afloat even at their worst moments.

The cast is warm and energetic, the script is alternately uproarious and painful, and the whole experience is a treat. Ultimately, Verano Place brings up the fresh and painful reminder of what it means to grow and change, and how at any age we struggle to figure out what it is we should be striving for.