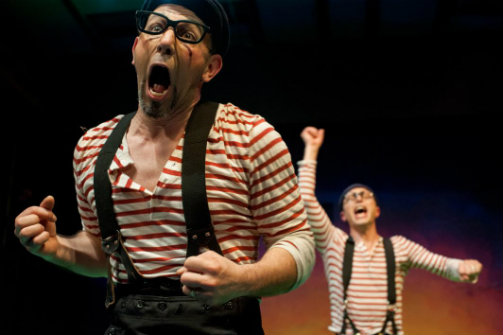 Jaron Hollander and Slater Penney in The Submarine Show. Photo by Eric Gillet.

BOTTOM LINE: A two-man physical theatre performance with no dialogue that engages its audience in a bizarre and imaginative adventure using mostly the power of suggestion.

I don’t know how prepared you can be for The Submarine Show, the unconventionally light-hearted performance created by physical actors extraordinaire Jaron Hollander and Slater Penney. Throughout the course of this madcap seventy-minute production, Hollander and Penney build an entire world and a fairly elaborate narrative through gestures, body articulation, facial expressions, eye movements, and self-made sound effects. For the most part, the two men sculpt out of thin air the suggestion of physical objects, spaces, and occurrences that are invisible to the naked eye. In a sense, this is physical storytelling at its best and its weirdest as well as visual storytelling at its most, well, invisible.

The tale begins underwater at the advent of a crash in which the two men, decked out almost identically and looking like maritime mimes, find themselves stranded in their ill-fated submarine. At least, that is what I think happens. Truthfully, one can never be quite sure. The devil is in the details and the details are almost entirely dependent upon one’s ability to stay focused on the gestures and to pick up clues to a world that is more suggested than visually apparent. The storytelling here involves no words, but you can be sure that during the course of the performance there is a lot of story going on. At various plot points and through a not entirely clear turn of events, the characters (and the audience) are transferred from submarine to desert island, transformed into birds, transported to an operating room, and transmitted into the air, water, and outer space. At the end, after all is (not) said and done, we find the characters back again aboard their submarine built for two.

It’s important to keep in mind, though, that the actual details are of no real consequence. The power of The Submarine Show is in its ability to captivate and engage its audience, letting them become a part of the story. A great deal of the performance involves Hollander and Penney traversing not only the stage but coming out directly into the theater. There's much enjoyment to be found in watching fellow audience members engage and improvise with the performers. A great deal of the success of the piece comes from appreciation for the sheer craftsmanship and skill that Hollander and Penney employ in order to create a world that you not only understand but want to play in. While the production involves no dialogue, no set, and not a lot of sophisticated lighting or elaborate sound design, it definitely possesses the power to elicit a sense of wonder and playfulness in its audience members that maybe most of us have not felt since childhood.