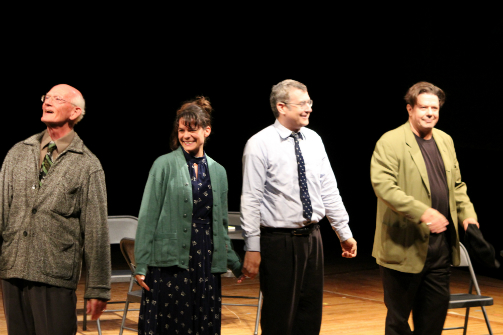 Taking place in a dreary hotel bar in Toledo, Ohio, on the evening of a tribute to a poet, The Princeton Seventh is billed as a "sad comedy.” This is a fitting label, for while the play flirts with what might be considered dark comedy, it is far less nasty or misanthropic than one might expect a play about competition among professional writers to be. It opens on two men at a bar waiting to attend the central tribute. One, named Jack Cutler (Alex Cole), is an aggravated loudmouth who writes moderately successful mystery novels. The other, whose name we do not immediately learn (played by Ari Hoptman), is quietly sardonic and claims to make $240,000 per year writing greeting cards, a piece of information that comes as a shock to the disgruntled Jack.

The even more shocking news comes when the unnamed man describes himself as having been a student of Max Lonoff's graduate seminar at Princeton University. This seminar is legendary for being composed of six soon to be world-famous writers known hereafter as “The Princeton Six.” Soon the two men are joined by Lonoff himself (Richard Ooms) and his much younger wife Waverly (Alayne Hopkins). While Jack is quickly relegated to getting drinks for everyone, the unnamed man seems to have all the other characters wrapped around his little finger, even as none of them know exactly who he is. As the play goes along, more about our unnamed man is revealed.

As the unnamed man, Hoptman is a charmingly deadpan and often affecting center, aptly playing each of the many facets of his character. As Jack, Alex Cole is both enjoyable and sympathetic as the irritable mystery novelist who can’t seem to get as much success as he wants. Ooms and Hopkins give broader, more overtly comic performances that lend the play a nice energy boost.

Writer/director James Vculek must be given special credit for making the often complex story of the play flow perfectly throughout. As the writer, Vculek has full control over both his story and his characters. As a director, he could have put a bit more effort into verisimilitude by actually filling the drinks onstage and choosing tables and chairs that looked somewhat more like the ones one would see in a hotel bar. The sparseness of the set does not quite match the style of the performers or their costuming. Otherwise, Vculek’s direction is just as controlled, heartfelt and organized as is his writing.

The Princeton Seventh recognizes the pain of competing with others on both an artistic and professional level. As Vculek sees it, professional success is mostly a matter of fate. However regarding artistic success the play offers up the idea that perhaps the opinions and rewards of others mean less then the satisfaction and expression of the creator.