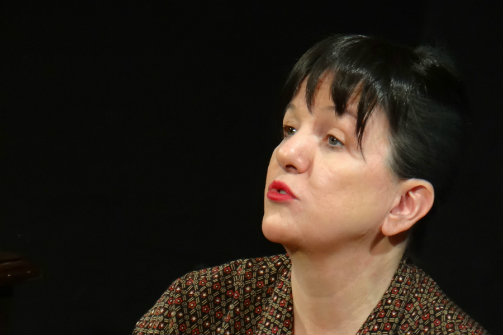 Dorothy Parker is among the wittiest, most quotable writers in literary history. For this reason, she is a ripe subject for theatre. The Portable Dorothy Parker, written by Annie Lux and directed by Lee Costello, isn’t the first solo show to put Dottie center stage, and likely won’t be the last. For those who are already aficionados of Mrs. Parker’s wordcraft, it provides lots of “A-ha!” moments. Those who are less familiar with the subject will learn quite a lot about her by the time the performance is over.

The piece focuses on Mrs. Parker (as her friends from the Algonquin Round Table called her) at home in New York in the 1940s, working with an unseen editorial assistant to select poems and fiction for a collection of her writing called (you guessed it) The Portable Dorothy Parker. Every scrap of paper on her table leads to a story, or two or three, about her childhood, career, and love life. Add in an unceasing flow of alcohol and you’re on for a wild, dishy ride through early twentieth-century American letters.

As Dottie, Margot Avery shows remarkable stamina, holding the stage solo for the entire running time. The play contains more of Parker’s words and witticisms than you can shake a stick at, making it seem as if she uttered all of her most famous quips in the space of an afternoon. If you have read or heard these lines before (“You can lead a horticulture, but you can’t make her think,” and “It serves me right for putting all my eggs in one bastard” are prime examples), you might find the way they are crowded together here somewhat uninspired. But when all is said and done, the lady was funny.

The play does contain some serious moments, such as Parker’s memories of her ill-fated affair with playwright Charles MacArthur, and her yearning for the approval of macho novelist Ernest Hemingway. More of these would possibly have made The Portable Dorothy Parker stand out among the parade of one-woman shows based on the writer’s life. As it is, it’s a theatrical highlights reel of the career of one very smart, very drunk, very unique American character.