The Curious Case of Phineas Gage 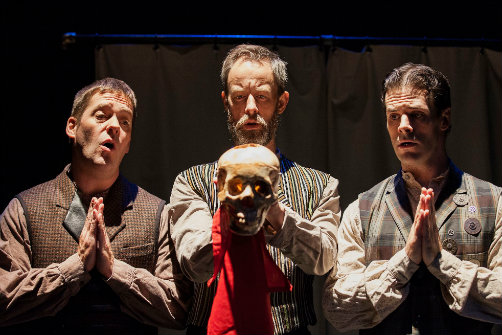 Bubbling with kinetic energy and crisp comic precision, Split Knuckle Theatre’s 2015 FringeNYC offering, The Curious Case of Phineas Gage, presents the truly mind-blowing story of a railroad-worker-turned-freakshow-attraction. In 1848, Phineas Gage was impaled by a tamping iron as a result of a blasting accident, with the four-foot rod passing straight through his skull and all but destroying his brain’s frontal lobe. His survival is a fantastically unlikely story even in its non-fictionalized form. But in the expertly bumbling hands of Jason Bohon, Greg Webster, and John Egan (“The Midtown Manhattan Entirely Factual Historical Re-enactment Society of Medicine” as the Monty Python-esque trio calls itself), the story explodes into the utterly surreal.

Armed with the unbiased tools of (so-called) logic and reason, the troupe takes up Gage’s remarkable recovery as the subject of strict academic scrutiny. Historical reports suggest Gage went on to lead a humdrum life as a stage coach driver in Chile following full psychological and social rehabilitation. Here though, their rigorous scholarly investigation (read: blundering birdbrained rambling) uncovers Phineas’ involvement in P.T. Barnum’s dastardly plots of global domination, a lizard-king conspiracy, and a colony of “Pinheads” whose rare skull mutation miraculously immunizes them to the effects of brainwashing. The story unfolds at a hilarious breakneck pace, and is supported with rich underscoring by Andrew Lynch’s period-perfect music, punctuating the frantic character shifts with multi-instrumental grace and finely-tuned musical dramatics.

Split Knuckle’s signature barebones style excels in the festival arena of few resources and many obstacles that hinder so many productions. Here they use only evocative minimal props and a small curtain to carry the audience from 19th-century America to subterranean lunar hideouts to a dramatic aerial disaster aboard a makeshift spacecraft, all with ease and excitement. The medicine show style of the piece, highlighted by whimsically sung smear ads preaching the dangers of Tesla’s alternating current (paid for by the trusty Edison Company, of course), takes full advantage of Drom’s underground-bar setting where the production is very appropriately situated. Curious Case is a testament to the playful traditions of theatre and storytelling, using simple tools to amplify an extraordinary tale.