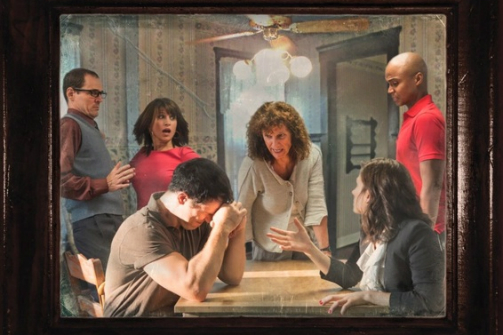 Mark Jason Williams’ Straight Faced Lies is a bit of an old trope with new tricks. The hour and half long play centers on Thanksgiving dinner with the Ryans, the standard setting of family dysfunction with the epitome of the dysfunctional family. This year’s holiday is a sort of dual celebration/terror, however: Dad is coming home from prison, and everything has to be just right.

The show’s first three scenes introduce the three couplings we’ll be dining with. James (Jacob Thompson), the son and head of the household, closeted and overly anxious, dodges his boyfriend Kip’s (Curtis Wiley) attempts to invite himself to the dinner. Melissa (Dana Domenick), the estranged daughter, is emotionally guarded even as she discovers she is pregnant with her boyfriend Joe’s (Joey Collins) child. Cathy (Geraldine Librandi), the mother whose children think she has “the compassion of a garden slug” but realistically has too much, fights with her sister Marie (Cindy Marchionda), a wild card who has been secretly draining the bank account of her ex.

As the title implies, this is a play that harvests a lot of emotional repression. The family is contentious, resentful, and everyone is bringing their own baggage to the table, only to find more waiting for them when they arrive.

But as clear as it is that the characters would give anything to be elsewhere, the same cannot be said for the actors. Straight Faced Lies finds its heart in a dynamic cast whose chemistry is relentless. Lead by the comfortable and naturally funny dialogue of Williams’ script, it’s hard to not be drawn in right from the get-go.

What this dysfunctional clan lacks in likability it makes up for in empathy. What is more relatable than the madness of an American family dinner during the holidays? It’s a trope we’ve sold movies on for generations (think Christmas Vacation but with less Burl Ives and more turkey eaten at gunpoint). And it gives you a second to think, “Well, at least my family…”

This bitter battle is very familiar. Like you and yours and me and mine, the Ryans are just another family trying to make a place for themselves individually and collectively. Unfortunately, they have each played a part in the calamity they face. Cathy has had her claws in her children for so long that they are both terrified and incapable of expressing any kind of emotion until they hit some form of rock bottom. But Cathy is not the root of their problems.

Both literally and metaphorically, the show does not end when the trigger is pulled. It’s not even the climax. The emotional battling and reckoning that follows is, as they fight against each other and their internal demons. Fundamentally, Straight Faced Lies is about the bad we do to ourselves and each other, often driven by love, other times driven by selfishness. Thanks to a bit of honesty in the writing and performances, it’s a show that dodges the cliché and stays fresh (and a little bit reflective).