By Michael DeMeo, Based on text by Frank Pierson; Directed by Ashlie Atkinson
Produced by Polemic Theatre Company
Part of the 2015 New York International Fringe Festival

Off Off Broadway, Play
Runs through 8.30.15
VENUE #2: Flamboyan Theatre at the Clemente, 107 Suffolk Street 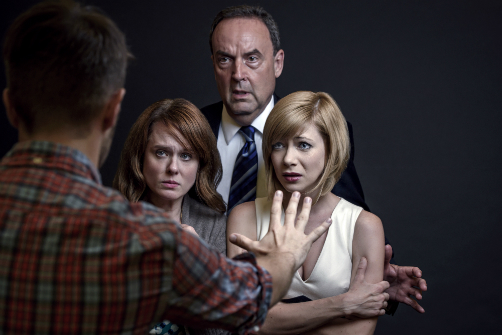 It isn’t news that we live in turbulent times. Acts of violence remind us of festering racial tension. Billionaires show that power in our political system can be—and has been—purchased. Polemic Theatre Company’s Stockholm Savings collages the biggest issues of our day together into a crime drama that tersely address our role as spectators, as social issues trend more and more towards spectacle.

Robbers Adam (Ryan Nicolls) and Andre (Reginald L. Wilson) didn’t ever seem to have a clear plan when they burst into a bank with guns. They wanted money, but when someone trips the alarm and relationships begin to form between unlikely parties in a shaky hostage situation, their composure flies out the window. They can’t handle the cops, nor the woman posting selfies with their weapons. And, when a massive crowd and media circus develops around the incident, Adam and Andre watch in real time as every aspect of their lives is twisted into something that can be used against them.

The scope of Stockholm Savings is broad. It encompasses everything from the pacifying function of religion to white male entitlement; from consumerism to media bias; from domestic hierarchy to the rights of trans individuals. Playwright Michael DeMeo effectively creates a catalogue of the hot-button issues of our day, phrased as a drama so high-stakes that each seems to be both causal and symptomatic of the others. This thematic overload might have felt bloated had it not been for director Ashlie Atkinson, whose clean organization of the action both inside and outside the bank gives clarity to a deluge of all-too-familiar click-bait fodder.

Perhaps the most striking part of the production (inspired by the real-life events that also inspired Dog Day Afternoon) is the intelligent, efficient design. Practical lighting effects by Miriam Crowe transformed laser pointers into a militarized police force, and express the atmospheric difference between inside and outside the bank with crystal clarity simply by bathing the room in flashing red and blue. Sound design by Julian Evans is spare and precise, deftly matched with dialogue and crucial to expressing the wider, media-drenched world that so informs the play’s events.

Without giving anything away, an event occurs at the end of the play which stings for anyone aware of the current epidemic of police brutality in New York and across the country. But, the feeling that this event is bound to happen in this kind of narrative is far more distressing than the event itself. Stockholm Savings spins a narrative very close to those presented daily on television and internet news outlets, and we, as audience members, sit and watch it unfold in the same way: silent and inactive. Polemic Theater Company is exceedingly brave for confronting us with our own blase attitudes, and for doing so with such directness. Their work is confrontational, but crucially important to to those of us still standing in a rubbernecking crowd of millions, absorbing the world around us through a screen. Stockholm Savings is a must-see for fans of tense, timely ensemble drama.