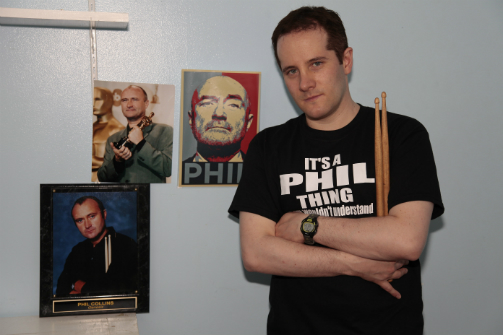 In this world premiere pop musical created by and starring Ben Rauch, a comedic singer-songwriter named Matt who idolizes Phil Collins (and the songs show it) is stuck in a rut both in his personal and professional life. He is hamstrung by severe stage fright, unable to play his original songs in public since his high school graduation years ago, and is eeking out a living playing backup keyboard for an improv troupe, the Pull-Out Method. He lives in a tiny single room occupancy apartment, and he can’t even afford NYC; he lives in Secaucus, New Jersey.

The small room Matt lives in is a metaphor for his small life. He has a superficial, at best, relationship with a superficial, at best, girl named Rachel (played by the excellent comedic actress Cali Elizabeth Moore), and a few stuck-in-adolescence buddies (the song "Mama’s Boy" is a highlight of the show). But enter Kim, Matt’s best friend’s sister. She was bookish in high school but now she is a glamorous club girl and seems way out of Matt’s league. The play consciously plays with this Asian stereotype with the song “I Love Asian Girls.” Luckily, they bond over their favorite greasy spoon diner in Jersey. Matt dumps Rachel and, with his confidence restored by Kim’s love, he is able to sing in public again and his future looks bright.

Single Room Occupancy is chock-full of comedic musical numbers sung with total commitment by a wonderful cast. The lively choreography by Jebel Arce adds charm to every number. However, the book is severely underwritten and some of the scenes are simply excuses to throw a silly song into the mix that doesn’t necessarily contribute to the play. Also a bit troubling is the way the women in the play are all directed to vamp up their performances in a highly sexualized way for no discernible reason, while the men, even the gay character, play it straight.

Overall, Single Room Occupancy is a fun, silly ride if you have the right expectations.