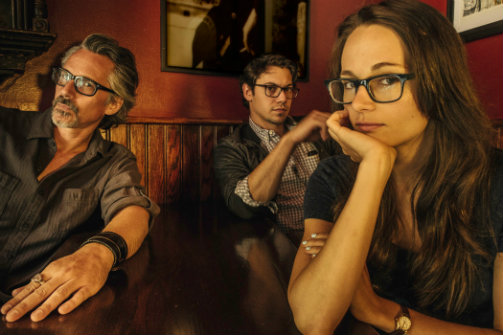 BOTTOM LINE: Schooled causes us to question the importance of pursuing one’s art at any cost, and explores the complex dynamic between mentoring and manipulation.

Schooled, by seasoned New York Times essayist Lisa Lewis, gets its world premiere at this year’s New York International Fringe Festival. To say this play is a near flawless literary feat is no hyperbole. The writing is witty and sardonic, and the ninety-minute production flies due to the superb dialogue, the fantastic direction, and the stellar acting.

Claire (Lilli Stein) is an obsequious co-ed and aspiring filmmaker who is determined to escape her past, and to forge a path of creative success through her autobiographical screenplay. Andrew (Quentin Maré) is her professor, a one-hit-wonder screenwriter who is as effortlessly smarmy as he is charming and wise. And then there's Jake (Stephen Friedrich), the handsome, clever, and affluent foil to Claire; despite their romance, Claire and Jake are in constant competition.

The play opens with Andrew giving a direct address to the audience, immediately engaging us in the world of Schooled. Through the complicated love triangle (and the competitive zeitgeist) that follows, we begin to glean a deeper understanding of who these characters are, and what happened in their past to make them this way.

Schooled is superbly cast by Judy Bowman. Friedrich plays Jake, the perfectly coifed student with the spoiled arrogance of a twenty-something, unapologetically and with conviction. Maré acts his role with a smooth hilarity; his Andrew makes the skin crawl, but at the same time, he represents that sexy, inspiring professor you might want to be, or else secretly want to be with. Maré plays his part with dexterity and ease, and makes us understand both how Claire is drawn to Andrew, and how Stephen resents him. Stein’s Claire is relatable and vulnerable; she brings the audience along on her emotional journey, and when she says to Stephen with the utmost sincerity “Screenplays saved my life,” there is no doubt it is true.

James Kautz's direction is flawless: every action is perfectly calculated, and every prop is in place, including the half-drunk beer on the table as the lights come up, and the ring of coffee on Claire’s screenplay as she awkwardly hands it to her professor. The simply dressed dorm room and the musical scene changes evoke a sense of the next scene to come; they add fantastic touches to support the tone of the piece. Schooled is what downtown theatre should be. The ensemble work is strong, the writing is sharp, and the direction is on point.