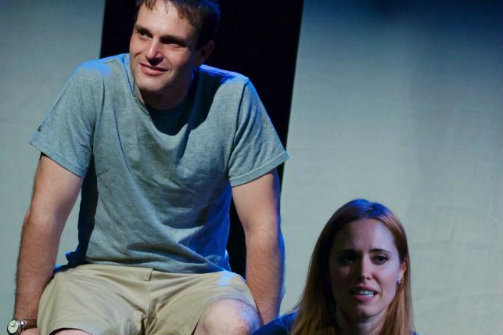 According to the NFL Players Association, due to the physical demands of the sport, the average professional football player’s career lasts less than three and a half years. In Eric William Morris and Ashley Rodbro’s Running Interference, the main character Ryan (Jeff Todesco) has played football for over a decade. Ryan's life is more humble than fans might expect and he is plagued by a lifetime's worth of mounting injuries and a deep seeded self-doubt. The play opens on Memorial Day as he heads to a vacation cabin to meet his lifelong best friend Jenny (Terra Mackintosh), her husband and Ryan’s former high school teammate Ben (Adam Petchel), and their football prodigy teenage son Charlie (Harrison Chad). As the weekend unfolds, it becomes clear that Ryan’s career and personal life are both on a devastatingly downward spiral.

The show is excellently cast with each ensemble member embodying their character with realism and ease, giving the production a relatable slice-of-life vibe. As Jenny, who is the nucleus of the story, Terra Mackintosh positively radiates. Despite the overuse of character names and an unlikely eavesdropping moment (a truly stale dramatic device), the writing by Morris and Rodbro feels organic and is an ideal match with Jonathan Judge-Russo's subtle direction.

On its surface Running Interference is an exploration of violence and ethics in sports, but the writers have skillfully crafted a play that is far more nuanced and character-driven than the sports theme would suggest. The dynamic of the group evokes the spirit of a perfect, if non-traditional, family quartet. The characters lovingly reminisce, imbibe, laugh, taunt, and tease one another, the result being a dramatic reflection of one of those rare summer nights you wish would never end. It is easy to be invested not only in the examination of American football and the effect the brutal sport has on the lives of its players, but also in the small intimate moments that unfold throughout Running Interference.