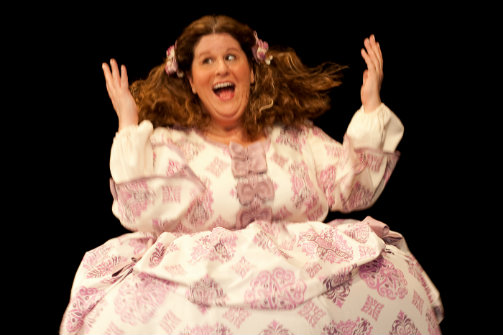 Andrea Alton’s show is “presented” by Ohio’s Possum Creek Historical Society, which solicits funding so they can bring stories to life (with photos, music, and other documents) about the illustrious folds of Possum Creek. One such character is Beth Ann, a simple-minded young woman who marries her childhood sweetheart Joseph. He has taken off for the war on their wedding night before they can consummate their marriage. She explains in the first of her many letters (3,000 or so in the end) to her soldier-husband that she is going to investigate what "consummate" means.

Over the days, weeks, months, and ultimately years that he is away, she shares with abundant cheer the happenings at home: she plants a field of sunflowers, she sets fire to the family’s mercantile store, her brother is found dead with his Indian lover, and the older neighbor woman pays her a visit. Apparently, this woman has a child in her “lady abyss” (a big laugh for that line) even though her husband has been away for some time. This of course goes over Beth Ann’s innocent head as she practices dreaming of becoming pregnant—after all, her mother once told her she dreamed of getting pregnant and suddenly, there was Beth Ann!

At one point Beth Ann becomes an unknowing and accidental participant in the Underground Railroad when Harriet Tubman turns up to ask if she would agree to lend out her house. Beth Ann loves trains and is happy to oblige. The famous runaway slave is one of the 12 characters Alton inhabits, some more skillfully than others. Tubman, for instance, comes across less like a fleshed out historical figure and more like a plot device. The standout amongst the townspeople is Reverend Butley, who has been blinded after being kicked by a horse. His Sunday sermon mainly consists of him cursing everything that he can no longer see.

Alton brings sincerity and enthusiasm to Beth Ann, and she is well served by Eric Chase's direction, which keeps the show moving at a brisk pace without pushing the limits of goofiness too far. Justin Plowman deserves a special mention as well for delivering a musical send off every time Beth Ann pantomimes signing a letter which adds a nice touch to Possum Creek.

You don’t have to see a Ken Burns program on PBS to appreciate Alton’s loving send-up of his distinctive documenting of history, although it gives the humor extra context. Come for the silliness, stay to get lost in the lady abyss.