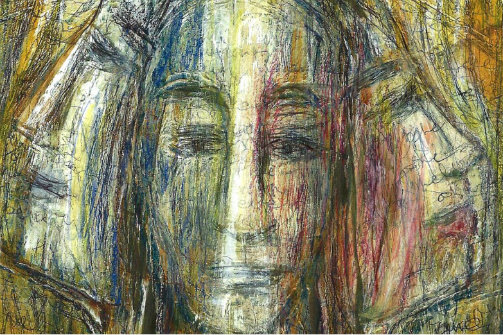 BOTTOM LINE: A slight but at times moving work.

There is little to offer with context at the start, and it takes some time for playwright Robert Siegel's frequently lyrical style to settle on the ear. What is at stake in the telling of these stories is unclear; it may be best to view the tales less as drama than collage. The limited narrative is based on the evolving interaction between the two performers, which increases as the show continues, leading toward a suggestion of union and hope.

“Studs Terkel meets Beckett,” as the Fringe listing describes Portraits, suggests a somewhat grander scope or impact than its 65 minutes hold, but there is much insight in Siegel's meditations on day-to-day existence. And Saviano and Giacalone are personable, capable guides through the portraits.

Brief musical interludes—on a saxophone and, less expectedly, a thumb piano—and some physical business in the latter half (Siegel also served as director) provide welcome interest in a show that at times tests the limits of less-is-more in its narrative and staging.