By Maryedith Burrell; Directed by Steven Samuels
Produced by the Magnetic Theatre
Part of the 2015 New York International Fringe Festival 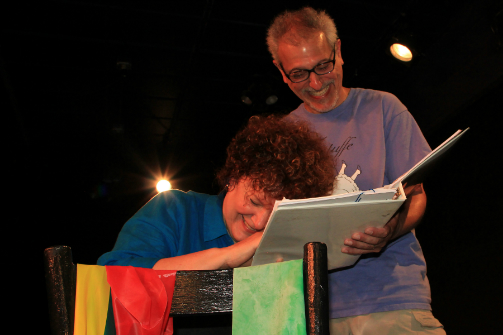 BOTTOM LINE: The great Maryedith Burrell shares her experiences of dealing with insurance companies and recovering after being knocked down by her dog.

Maryedith Burrell reminds me a lot of one of my favorite performers, Lily Tomlin. She has an ease about her. Everything she says and does is intentional. For instance, Ms. Burrell does some stretching with exercise bands and hand weights while she is talking to the audience. It not only gives an interesting visual image, but accents what she is saying and transitions topics in a beautiful manner. I could tell that she is no stranger to writing and performing. The straight-forward humor is witty. She writes having done all of her research. One statement that she mentions mid-show is, “There is not enough heroin in Hamburg to get me to Monday.” What an exhibit of a show biz vet. Knowing you are funny is a difficult tightrope to walk, but I think she has had plenty of practice in keeping her balance.

Ms. Burrell was knocked over by Miss Butters, her dog. That was the inciting incident for this story she has to share with us. Even getting up was a shit-show, since the police were not allowed to touch her while her leg was still attached. Fortunately it was “merely mangled.” After getting help from firefighters and drugs from paramedics she managed to get to an emergency walk-in establishment. Though she needed surgery for her tibial plateau fracture, the doctor wanted her to go home and wait a few days for this trauma surgery. Ms. Burrell goes on to tell us about health care and her mental and physical recovery. Not a single pamphlet was given to her about the weight gain, depression, stress, and bills that resulted from the injury, surgery, and immobility. It seems the hardest thing for her, though, might have been having to switch her regular footwear from Jimmy Choo to Birkenstock.

From her anecdote about working as a temp for an Accidental Death & Dismemberment Department to the part of the story about her negligent surgeon, I was amazed by Ms. Burrell's ability to be grounded in her performance. Though a few sections could have used a quicker pace, this story of corporate profit from individuals' misery is both educational and funny.