Off Off Broadway, Play
Runs through 8.22.15
VENUE #5: The Celebration Of Whimsy, 21 Clinton Street 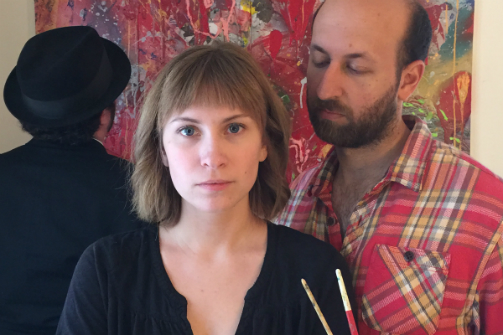 BOTTOM LINE: An intimate and tragicomic look at a famous artist’s life through the eyes of his lesser-known wife.

Michael Stock had a winner from the beginning when he decided to adapt the intriguing, untold story of artist Lee Krasner for his Chicago-based company, Sideway Theater. It’s as though Krasner’s story of living and loving in Jackson Pollock’s shadow was waiting to come to life onstage, as both an intimate insight into one of the United States’ most famous artists, and as a means to redeem Krasner from the margins of art history textbooks. With a strong source material to get them started (and possibly a few artistic liberties on the history), Sideway Theater paints an inviting and intriguing portrait of this contemporary art power-couple. They bring wit, humor, sensuality, and sensitivity to Krasner’s tale, and the result is thoroughly entertaining.

The play opens with a split scene between viewers at an art museum examining Lee Krasner’s work (“Who’s that? Never heard of her…”), and Krasner (Elise Randall) herself, inviting us into her story as she makes sense of the collage of her life. She begins to narrate the story of how she met Jackson Pollock (Andrew Shapiro) while they were both preparing for an American and French Paintings exhibit. The two modern artists are instantly attracted to each other, and their fifteen-year-long journey together begins. For the rest of the play, Krasner leads us through the hills and valleys of their respective careers, their marriage, and Pollock’s battles with mental illness and alcoholism.

A great deal of No Chaos’ appeal comes from its versatility and universality. It is simultaneously a history play, a Cinderella story and a love story, a comedy and a tragedy, a think piece, and a raunchy delight. It is even a feminist exposé on the patriarchal art world while still celebrating of one of America’s greatest artists.

Though at times the dialogue may be a bit on-the-nose, Stock excels at maintaining an upbeat tone with a witty bite when times are good for Krasner and Pollock, then does not shy away from the couple’s fear and frustration when Pollock’s mind gets the better of him. The cast is brilliant: Elise Randall as Lee Krasner exudes charisma, strength, and a fierce intellect. Andrew Shaprio gives a troubled icon profound humanity as Pollock, and the ensemble (Maddy Stark and Greg Wenz) delight the audience with their versatility, as they each play a variety of friends and colleagues in Pollock and Krasner’s life.

With the production’s stripped-down production aesthetic, we never even see the paintings, sculptors, or collages that define Krasner and Pollock’s lives and legacies. And yet, the merely imagined presence of these great works still conveys the essence of their greatness...and, more importantly, brings the focus back to the humanity of the people behind the paintings.