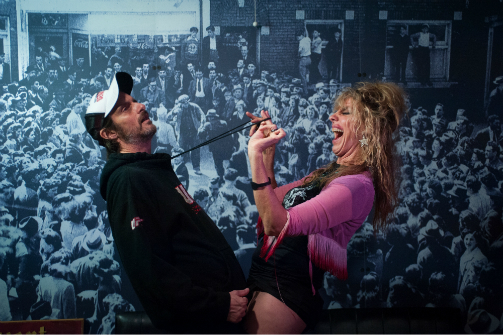 BOTTOM LINE: A meditation on a sex trade worker and her former love at home—in a bar.

Two bar regulars are threatened to be pushed out of their local watering hole. They have a history together as lovers and friends—one that is thicker than the looming threat. The show's venue, DROM, is a bar and lounge with a performance space in the East Village. The setting is apropos considering the wave of gentrification that has washed over the neighborhood over the past ten years. While the play is set in a town called Hamilton, in Canada; playwright and director Sky Gilbert compares it to Queens, New York.

The story is told through the eyes of Tee (Suzanna Bennett), an older sex trade worker, and Tom (Scott McCord), one of her former lovers. The bartender, an offstage presence, is shutting the bar down early to accommodate a photo shoot that is taking place at the bar. Tee and Tom refuse to leave and make enough of a ruckus that the bartender presumably locks them inside the bar to fetch the police. It’s not just any old bar to Tom and Tee. It’s their living room, bedroom in some instances, and even their church, in a way. Plus, it’s the only bar in the neighborhood that hasn’t banned them! We gather the sense that these two are sort of fixtures there—it’s their home.

Naked Hamilton is a meditation on these two individuals. Both the characters and the actors who play them are interesting to watch and their relationship is developed with ease. These are also rarely seen characters and I was really rooting for them. However, the play left me wanting more. We are thrown into the world but much of the text is drunken bar banter that doesn’t seem to lead anywhere. The script fleshes out their relationship with each other quite well, but there is little action. I hoped the play would lend itself to a wider conversation about gentrification and the communities that are being pushed out, but it fell just short of this. The play ends where it begins.