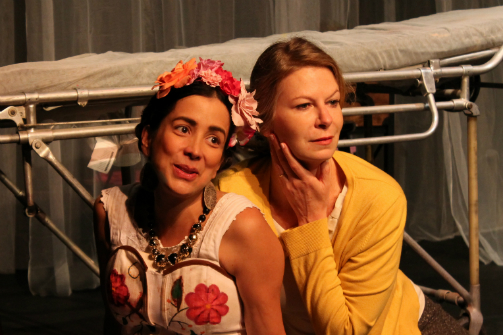 If you could pair up any two women from the past who would it be? Mexican painter Frida Kahlo and American poet Sylvia Plath, of course! After all they are both post-feminist women, both artists, and both had cheating husbands who were dedicated to the same art as they were (painter and poet respectively). Or maybe it was Sylvia’s daughter, also named Frieda, who inspired playwright Néstor Caballero to forcefully introduce these two illustrious women to each other. Such is the premise of MUSAS, an intriguing idea with lopsided results.

We move back and forth between Plath’s drab study sporting a cold typewriter for her depressing thoughts, and Frida’s colorful bedroom with easel, paint and passion, to only sometimes meet in between, when the two women help each other remember what made them special, caused them pain and made them memorable to generations to come. Power comes in numbers in MUSAS, as the scenes where the women are together work best, like when Kahlo entices a square Plath to drink tequila and smoke peyote, but these bonding moments are too seldom and far in between. Director Iraida Tapias splits the stage in three to further isolate these worlds. Most of the information is directed towards the audience, as if we are watching two separate solo performances that only sometimes converge and therefore depriving the women opportunities to experience each other. Unfortunately while Caballero’s Kahlo can stand on it’s own, his Plath is whiney and falls flat.

Caballero has history on his side, and he uses the assumption that everyone knows about Plath and Kahlo to his advantage, the exposition is minimal and the off stage players are vivid. Plath only need yell out her husband Ted’s name for us to know the anguish and abandonment she faced because of him, the same goes to Kahlo in relation to her womanizing Diego.

Monica Steuer not only bares an uncanny resemblance to Plath, but she also excels at shaping an otherwise one-dimensional character into a full-bodied tormented soul. Rebeca Alemán is a powerhouse to watch as Kahlo: she majestically balances on the tightrope of Kahlo’s complexities, succeeding at interpreting her childlike ways, enthusiasm, and sexuality, while also having to deal with her pain and loss. Alemán even briefly channels Kahlo’s friend —and alleged lover—Chavela Vargas, when she sings. Also of note are Raquel Ríos' colorful costumes.

MUSAS holds a lot of promise, especially if Caballero commits to his premise and has Plath and Kahlo deal more with one another. I would be interested in seeing further incarnations of the play.