Off Off Broadway, Play
Runs through 8.25.15
VENUE #2: Flamboyan Theatre at the Clemente, 107 Suffolk Street 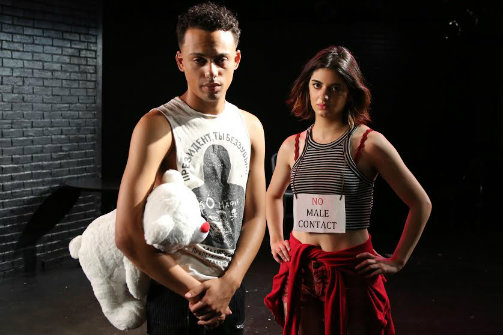 BOTTOM LINE: A drama about two participants in an “intimacy seminar” who are forced to connect despite their own insecurities.

In the spacious Flamboyan Theatre, Yasmine Lever’s drama unfolds as two strangers are forced to connect at the “intimacy seminar” in which they are both participating. Land of Broken Toys follows Amber (Christina Toth) and Luke (Mazin Akar), two New York City residents who have found themselves at a seminar that calls partners to break down barriers. Interspersed with this seminar are flashbacks that provide some context for Luke’s participation at the seminar, although they don’t necessarily facilitate plot development. Amber’s back-story is kept a mystery.

The intimacy seminar is presented in a consciously non-realist fashion: through a series of prompts called out by a master of ceremonies (Bryan Hamilton), whose over-enthusiastic demeanor resembles a game show host more than an intimacy expert. The emcee faces the audience to announce each talking point, involving us in the forced intimacy that we are watching play out like a blind date neither party can escape from. While this device occurs throughout the play, Amber and Luke’s one-liners and cheeky replies, interesting enough in isolation, don't quite develop into a conversation that gives each character dimension. It's up to Toth and Akar, both talented actors, to help make these characters more complex.

A second story line is introduced amid Amber and Luke’s exchange by way of Kenna (Sydney Farley) and Barnaby (Sky Lakota Lynch). Kenna and Barnaby, whose names evoke the famous commercial dolls, are two young people who meet in rehab and are attracted to each other even though they know they shouldn’t be. The two narratives—Amber/Luke and Kenna/Barnaby—come together towards the end of the play to introduce a monster plot twist. While I understand the desire for an eleventh hour twist, this means there is not much time left to fully explore the rich potential of this new information. The music and choreography, by Or Matias and Rebecca Marie Hidalgo respectively, are enjoyable but sparse; it's a shame writer/director Lever didn't make more use of these two elements. Yasmine Lever touches upon a potentially interesting idea by using the metaphor of “broken toys” to speak of people who’ve succumbed to the pressures of their own insecurities (Kenna and Barnaby) as well as those who are trying to fix themselves (Amber and Luke). Land of Broken Toys is a strong concept with some great material and a promising ensemble cast.