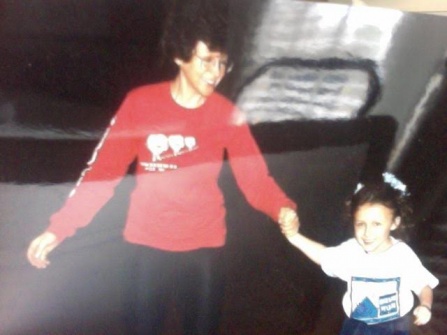 BOTTOM LINE: The remarkable story of a challenging childhood—complete with hilarious and painful moments—related through a colorful sense of humor.

Lee Harrington says it is not hyperbole to say that her estranged biological mother, Bonanza Jellybean, calls her roughly 25 times a day. Harrington has stopped answering these calls. Now, she wants input from the audience as to whether or not she should stay connected with Jellybean.

We cannot help Harrington make this decision without understanding the events that led to this moment. Thus, she must delve into the incredible story of her upbringing. The journey is so complex, and involves so many people and locations that a whiteboard is used to provide diagrams and helpful illustrations. Harrington also keeps a running tally in the corner to track the pros and cons of having Jellybean in her life.

When Harrington was around 3 years old, her mother experienced a mental breakdown. Originally named Cynthia, Bonanza Jellybean lived a life of hoarding, committing fraud, and sending her daughter to live with many other families when the air needed to clear. Harrington also spent roughly 8 months in the foster care system, going in and out of homes and shelters.

The most outrageous moments of Harrington's life happen when she is in the care—or non-care—of Jellybean. I do not want to give many specifics of this time because part of the enjoyment of listening to this story is being surprised by the turns, twists, and bizarre events. Harrington does a great job of teasing the audience with strange information, including that her basement was filled wall-to-wall with boxed sewing machines, not providing an explanation until much later.

Harrington has a gift for storytelling. She takes a very difficult childhood and uses a learned sense of humor to find silver linings everywhere. She creates a very casual, light, and friendly atmosphere as she animatedly interacts with the audience in her bare feet and messy ponytail. The mood and energy in the room stay light, even as the anecdotes become darker.

In the end, Lee Harrington's story is one of triumph in the face of challenging odds, and coping with obstacles through humor. While Jellybean caused a lot of pain, Harrington is still able to acknowledge positives that came from her unique upbringing. If nothing else, her biological mother provided her with many great stories to tell.

I felt privileged to be one of the people hearing these stories, and cannot recommend Jellybean enough. Harrington finished her sold out solo show to a much-deserved standing ovation. After FringeNYC, she will be presenting Jellybean at United Solo Festival in September.