I Want to Kill Lena Dunham 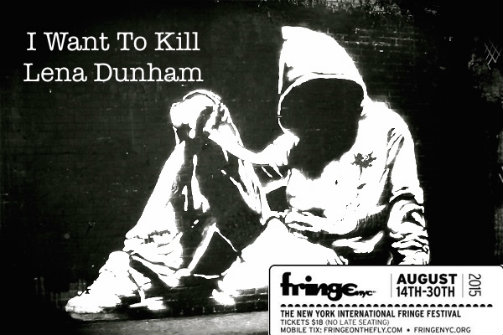 BOTTOM LINE: In a dramatic comedy, killing Lena Dunham wouldn’t be an act of jealousy but an act of political revolution.

Lena Dunham. In today’s celebrity-obsessed world, you either love her or love to hate her. Nora (Shereen Macklin), a twenty-something artist in Brooklyn who struggles to get by, sides with those who hate her—so much so that Nora could even kill her. Yet Dunham isn’t the leading antagonist implied by the play's title. Writer and director Sergio Castillo is making a larger point about American culture and its obsession with entertainment and celebrities. While society indulges in their obsession, it inadvertently neglects the social issues that matter.

The show opens with Nora sitting center-stage in contemplation, with a gun in her hand. She speaks directly to the audience about the terrorist acts of Operation Condor in South America during the 1980s. She then reminds us that actress, director, and producer Lena Dunham was born during this era. The next instant, an energetic hipster-looking blonde (Melanie Rothman) with bouncy curls runs onto the stage to interrupt Nora’s oration. She rambles on about how amazing Dunham's show Girls is, exclaiming “It’s like Sex and the City is what you want your life to be like, but Girls is what your life actually is.” The audience has a good laugh at the character’s expense, noting how many times she throws around “likes” and “OMGs.”

Nora’s life begins to unravel as Dunham’s seems to flourish. She loses her part-time job, can’t pay the rent, is on the verge of eviction, is endlessly fighting with her best friend’s partner, and can’t land an art show. While the realistic scenes unfold, there are repeated moments where she breaks the fourth wall to address the audience in a fashion similar to the opening scene. Nora brings up the murder of Dr. Tiller the abortion activist, the War in Iraq, the shooting of Trayvon Martin, and the frauds committed by the Wall Street tycoons, to name a few. Each time, she is interrupted by the bouncy blonde whom also plays the role of an entertainment news host gossiping about Lohan, Amanda Bynes, and Dunham (of course). Just when Nora is at her lowest, Dunham is winning a Golden Globe. What else can she do but kill her?

The conversation surrounding race, art, and celebrity-culture is an important one, and the dichotomy between the two characters is compelling in speaking to these topics. However, I do think the repetitive structure of the show gets a bit tired towards the end and slows down the production’s momentum. Parts of the script and direction are heavy-handed, in that they allow little room for the audience to discover meaning for themselves. Regardless, I do believe that millennials will relate to Nora’s frustrations—especially the artists out there!