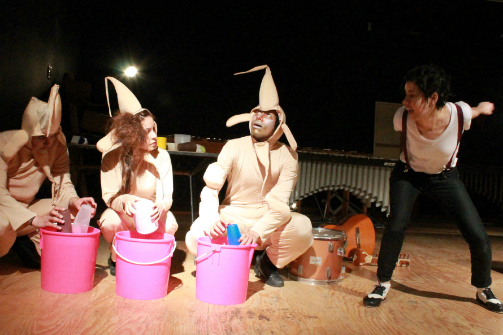 BOTTOM LINE: A beautiful cacophony of expected sounds fit for both adults and children.

The clock strikes 8 on a Saturday evening as I wait in an adult filled audience, peppered with a few youngsters for the Fringe Jr. show, Ideas, Not Theories to begin. I note my surroundings, hypothesizing that perhaps this show was purposefully scheduled for older audiences to enjoy. After all, this theatrical percussion performance, which promised to make music using unconventional instruments, ranging from water to bicycles, had lured me there enthusiastically.

The stage entices its audience, strewn with marimbas, drums, buckets, plastic containers and scrub brushes all silently waiting for composer Reynaliz Herrera to utilize in creating her gloriously inventive soundscapes. As taught to us by the program’s provided synopsis, we assume that these materials live in a warehouse which magical creatures (played by Joanna Chen, Robert McCarthy and Austin Birdy) inhabit. The performers are disguised as far away from human form as possible—dressed uniformly in light gold colored jumpsuits stuffed with bulging pink tubing winding across their bodies, and hoods that fasten shiny horns on top their heads.

The story itself is told silently and seems formed only to provide a loose context for Herrera to let us encounter her playground of sound. Indeed, the later is the heart and joy of the piece and what makes it so suitable for all ages. In the narrative, we are introduced to the evening’s antagonist, a foppish cop who keeps watch over the space. As he clears, a kid (played by Herrera), claps enthusiastically onto the stage, discovering the body itself as an instrument and awakening the magical creatures. It is worth noting that Herrera’s choice to clothe herself androgynously in skinny jeans, a t-shirt and suspenders, smartly renders the child’s gender irrelevance.

A cop appears periodically to half-heartedly reprimand the gang’s cacophonous clatter, but mostly we are just treated to the music that Herrera and the ensemble create out of these unlikely instruments. The children in the audience seemed at first mesmerized by the performance, and though attention spans faded, I don’t know that I can fault the team for these young audience members being too close to bedtime. From my perspective, parents better be comfortable with a clamorous household and a few items missing from their cleaning closet, because Herrera puts on a wonderfully inventive concert that encourages children to utilize their imaginations and creativity to see music in the mundane.