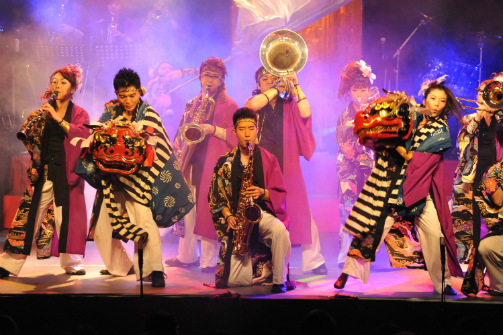 BOTTOM LINE: An opportunity to make music with a lively and multi-disciplined Japanese brass band.

In both the playbill and performance of CRAZY ANGEL COMPANY's GAHOU international SUNRISE, non-Japanese speakers are informed that “gahou” means “beautiful motion” and “roaring.” But the best evidence comes not from this pronouncement, but from the display of both of these states onstage. Japanese folk and pop songs are reorchestrated for the 15-member brass band, all of whom take on instrumental and dancing duties, often simultaneously.

The performance is a diverting and swift-moving 70 minutes of song and dance, interrupted occasionally by charming narration from director and trumpet player Yoshiaki Saito.

The songs are unlikely to be familiar to audiences who lack knowledge of the Japanese musical landscape, with the single exception of “Scarborough Fair,” which was paired with the Japanese folk song “Sakura” in one of three different versions the latter was given (one each of brassy, jazzy, and rock-ish).

The biggest impression I was left with was admiration for the cast's enthusiasm and energy, and jealousy of their stamina. I marveled at the choreography (by Mariko Funasaki, who also ably takes on many of the dance solos and plays trumpet) and musicianship, the multi-tasking, and the various vibrant personalities. They are constantly in motion as they switch from holding instruments while they march around the stage to wielding flags and weaponry as they leap above it. They didn't ever seem to tire, and in this bouncy collection of thirteen numbers, neither did I.

The decibel level matches the cast's energy level, amplified perhaps louder than necessary and giving a party-like mood to the show.

Audience members are handed naruko, wooden noisemakers to provide percussive assistance for the more boisterous songs (that is, most of them), and the finale is a call-and-response song. Participation is encouraged, but is not required. Then again, shaking the naruko and shouting a few words back at the stage felt like the least I could do in support of the company's abundant enthusiasm.