Off Off Broadway, Play
Runs through 8.26.15
VENUE #2: Flamboyan Theatre at the Clemente, 107 Suffolk Street 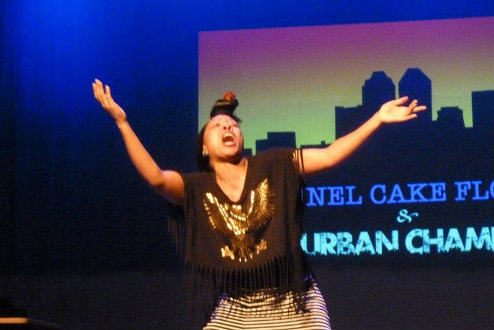 BOTTOM LINE: This sort-of one-woman show takes on a huge mission: to expose the experience of code-switching, minority America in a fictional television series, The Urban Chameleons.

The trench coat-wearing, cat-eye bespectacled reporter Funnel Cake Flowers (HaJ) changes costumes and characters, backed by dancers, a DJ, and a stage manager character, to incorporate a whole host of subjects for analytical study as she roams the streets investigating where black and brown meet white collar.

Funnel Cake Flowers & The Urban Chameleons mixes monologue, mockumentary, hip-hop dance, Twitter, and chats with the audience. The execution is muddied—it’s hard to tell if the rocky technical elements of the show are intentional or unfortunate, and the incorporation of live tweets does more to confuse than to enhance. But the issue at the heart of the play is compelling. Why don’t we have more humorous, rich, and spirited portrayals of African-American and Latino cultures as multivalenced? Why don’t we feel able to laugh, sip our tea, and shake our heads at the day-to-day farces surrounding loss in translation, gaps in cultural understanding, and flat-out racism?

Given the current climate surrounding news story after news story of tragedy and bigotry, Funnel Cake’s approach may seem at times too light-hearted. It’s hard to laugh at a character named “crack boo” who rakes lawns for $5 to get the next fix. It’s hard to laugh at a white man in a board room bobbing his head back and forth in Tyler Perry-esque “oh no you di’int” fashion. It’s hard to laugh at surface level humor involving a gunfight in a hair salon or a woman who yearns for linguistic recognition. The saturation of these situations also makes it difficult to sort out exactly which demographics Funnel Cake claims to be speaking for. But bringing the situations to light is what guides the show forward.

At a time when we’re seeing the republication of Fran Ross’s Oreo and Key & Peele exploring the comedy of biracialism alongside heightened outrage at racial inequality and police brutality, the show is certainly topical. Though not all elements are seamlessly incorporated, the dance ensemble plays off the content in its choreography, moving us from topic to topic. Despite the awkwardness of requesting the audience to tweet and the occasional lag in technical elements, the tagline of Funnel Cake’s show remains salient: “It’s complicated here in these streets.”