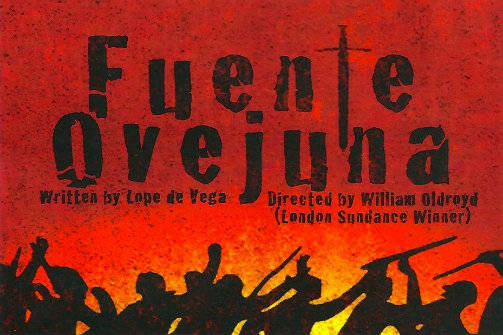 Published in 1619, Lope de Vega’s Fuente Ovejuna may seem like a museum piece; however, in this stunning production by the Ducdame Ensemble, the vivid characters spring to life and de Vega’s 400-year-old words sound as resonant today as they must have in the corrales of the Spanish Golden Age.

The residents of the village of Fuente Ovejuna live in subjugation to the tyrant Commander Fernando Gómez de Guzmán (Sam Gilroy), who helps himself to the village’s bounty—wine, pottery, even the women. When the virgin Laurencia (Jane May) rejects his advances, he rapes her on her wedding night. Incensed by this act of brutality, the townspeople rise up in revolution, storm Guzmán’s castle, and kill their overlord. When the news of this reaches King Ferdinand and Queen Isabella (Alexander Kirby and Cori Hundt), they send Judge Manrique (Ian Harkins) to lead an inquisition into Guzman’s murder. The gut-wrenching screams of the women being tortured to give up the murderer’s name tear through the theatre and make the audience’s skin crawl as each question of who killed Commander Guzmán is met with a repeated response—Fuente Ovenjuna!

Under the precise direction of London Sundance Winner William Oldroyd, the excellent Ducdame Ensemble, comprised of graduates of the London Academy of Music and Dramatic Art (LAMDA), present de Vega’s work as if he had written it in response to our current global political climate. Conceived in the wake of the Arab Spring, this production transcends the village of Fuente Ovejuna and speaks to oppression in all corners of the world. It brings to mind not only the oppression of women currently being carried out abroad by Boko Haram, ISIS, and the Taliban, but also hits closer to home with current issues of police brutality, income inequality, and oppression based on gender identity or sexual orientation.

Oldroyd originally staged the piece to be performed with “traverse seating” in which the audience would be divided by gender and sitting on opposite sides, as opposing teams, while the performance took place in the middle. This staging draws on the gender separation in the theatres of Spain when the play premiered, but also heightens the gender disparity of the world of Fuente Ovejuna and incorporates the audience into the action. It is a shame, then, that the organizers of the Fringe Festival forced the performance into a traditional proscenium configuration. While, to their credit, the Ducdame Ensemble adapted to the new configuration with short notice, it seems the audience’s loss that we were not able to fully experience the piece as intended.

It is impossible to isolate outstanding performances in such a strong piece of ensemble acting where every performer excels and also supports the rest of the company. Sam Gilroy is menacing as Guzmán; while Brittany Chandler is endearing as the poetess Menga. Jane May and Kelly Strandemo encapsulate a female strength as they rally the women, maenad-like, to tear the commander to pieces. The strength of every member of the Ducdame Ensemble makes them a company to watch. I cannot wait to see what they have to offer next.