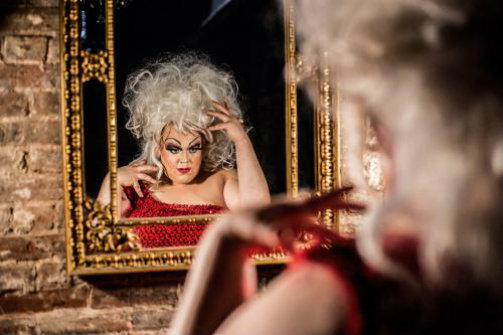 BOTTOM LINE: The brutal truth of the meek man behind the mighty Divine.

Much of Divine/Intervention is just what I expected: A bitchily funny tale of a fascinating drag queen desperately clinging to the stardom she has/had. What I didn’t expect was the utter hopelessness behind the outlandish lashes and brows. Frantically trying to separate the man from the sassy, vulgar, too-true-to-stop Divine proves to be impossible. Utterly divine she is, and Divine he always has to be. But who is the man without Divine? As Divy says, “I don’t speak unless you open your mouth.” The match of a lifetime is about to unfold: The Man v. Divy.

Born Harris Glenn Milstead, the “drag queen of the century” adopted his drag name, Divine, after working closely with director John Waters on many counterculture/cult films (the most famous being Pink Flamingos and Hairspray.) Written by E. Dale Smith, Divine/Intervention centers around both the man—Glenn Milstead (Ryan Walter), and the drag queen—Divine (Bobby Goodrich). With original concept and direction by Braden Chapman (aka Mimi Imfurst of RuPaul's Drag Race), Divine/Intervention unfolds as a series of flashbacks and confrontations between these two sides of the same person, imagining what takes place the night Milstead unexpectedly dies in his hotel room.

The date is March 7, 1988, the night before Milstead was supposed to appear as Uncle Otto on TV's Married...with Children, an opportunity that would provide him what he so desperately wanted: national exposure out of drag (but Milstead died that night in his sleep of an enlarged heart). As Milstead's excitement for what's to come ebbs, the brutal honesty of Divine takes control.

Mark A. Dahl's set consists primarily of a brightly lit dressing room mirror, perpendicular to the audience; the actors sit on either side, constantly looking at (and talking to) the other half of themselves. Often both will make the same gesture, and while this “mirroring” of actions can get tiresome, and the dialogue and emotions repetitive, we still get lost between the two sides. We see a man unraveling, barely afloat in the monumental flood of expectations, ego, and lack of self-control. The exchanges between the two are guttural and cruel, sad and clichéd, confusing and enlightening.

Divine/Glenn is deeply complex, and if Goodrich and Walter take a while to hit on true honesty, eventually they really sink in and let loose. What we experience is a clever back-and-forth between a man and his seemingly “bad” angel: Have another drink, have another toke, don’t stop what you’re good at, without ME you’re NOTHING. Glenn wants to turn her off: Divine is exhausting and Glenn needs to move on. But can he really move on? We see someone who leaves a lover (Lee, played by Terrell Green) before the lover can leave him, yet who is severely in need of love. Glenn/Divine is a human who is exposed—one who feels the world is laughing at him, not with him. Glenn wants to be respected, admired, and loved—as Glenn. Yet Divine is the reason for the respect, admiration, and love. Divine is unstoppable. She is in our hearts and minds, never to be forgotten. Glenn might die, but Divine will live on.