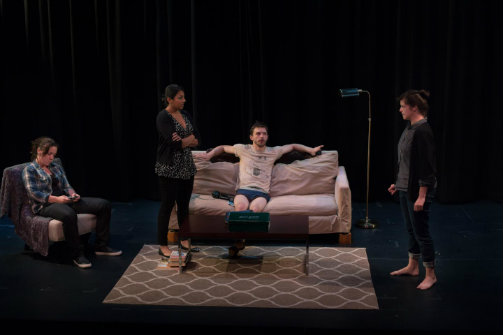 BOTTOM LINE: The themes of support and friendship in the face of extreme tragedy make Coping a poignant and moving experience.

Jacob Marx Rice’s Coping opens on Sarah’s apartment, meticulously cleaned and organized, her shoes placed neatly in the corner of the room. Lights come up on the entire cast scattered across the stage. In direct address to the audience, speaking as if into an answering machine, each character is given a moment to speak of Connor’s death. Reflecting the reactions of four very different individuals, Coping considers the swell of emotions and inevitable guilt suicide victims leave behind.

Jessica (Lipica Shah), Connor’s sharp-tongued sister, begins the action of the play. Sorting through her brother’s mail, her resentment towards her brother’s guilt-stricken girlfriend Sarah (Lauren LaRocca) is immediately apparent. LaRocca is convincingly neurotic, as she continues to painstakingly search Connor’s medical textbooks in the hope of finding some kind of explanation for his suicide. Lucas, the stoner roommate (the hilarious Scott Thomas), is then introduced; he is the foil to Sarah. Only later do we realize that Lucas’ role in the play is, in fact, the mediator, as he truly is the wisest of the bunch. Jessica’s girlfriend Taylor (Lauren Hennessy) travels from California to Baltimore to support her girlfriend in her time of need, and later we learn that she is no stranger to coping with suicide. Taylor acts as the voice of reason, as the one person who Jessica feels supported by, and the only individual who can placate Sarah’s OCD. Hennessy’s Taylor is adorably uncomfortable, constantly saying the “wrong thing,” allowing Sarah to finally let loose, and express how she truly feels. She acts as comedic relief, along with Lucas, to lighten a highly volatile topic. Dinah Berkeley is realistically condescending as Janie, the funeral organizer.

The cast is excellent across the board, creating a deep and heartfelt intimacy. Shah is immediately likably sarcastic, and later bitingly cruel. Her heartfelt speech about losing her younger brother is evocative and powerful. Hennessy is adorably sincere, and hilarious; Taylor's warmth and good intentions, as well as her raw sexuality, are subtly clear. La Rocca's desperation reels the audience in, and engages them to empathize with her plight. Thomas plays the traditionally cliched role of the "druggie in emotional pain" with relatable humor and depth. Berkely and Olmstead round out the cast wonderfully."

Despite some confusing elements, Rice has crafted a compelling story and managed to create nuance within such a decidedly depressing subject. Director Anna Strasser uses the space incredibly well and highlights the connection between characters beautifully.

Each individual in Coping experiences grief in a different way. Sarah holds it all in, Taylor makes jokes, Jessica gets angry, and Lucas takes drugs, but despite these wildly different reactions, the connections they share bind them together and offer the support each of them desperately needs.