Chop Your Own Wood 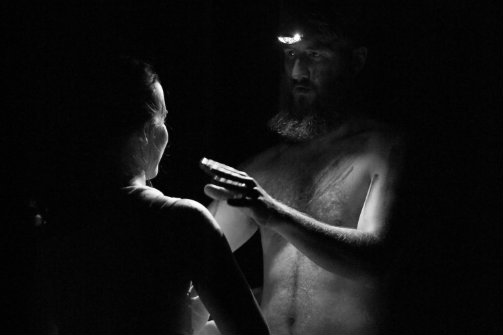 Lindsey Trout and Tyler Caffall in Chop Your Own Wood. Photo by Ross Thomas.

BOTTOM LINE: A lovely new play that honestly explores the rift that grief creates in a marriage, and the uncertainty, pain, and idealistic hope that lie in the wake of loss.

When life gets rough and complicated, you can flee upstate—right? Go camping, put reality on hold and just pretend for a while, with no one calling your bluff. Such are the idealistic hopes of estranged couple Daniel (Tyler Caffall) and Lydia (Lindsey Trout) in Bonneville Theater Company's Chop Your Own Wood.

The play opens with Daniel (played with sincerity and rugged charm by Caffall) setting up camp in a clearing in the Hudson Valley woods, where he and his wife Lydia (the sweetly simplistic Lindsay Trout, aka playwright L.T. Hughes) have been going to see the Perseid Meteor shower for years now. This little piece of land holds a lot of sacredness for the young couple—it’s where they got engaged, and now, we come to find out, where Daniel (unbeknownst to Lydia) is planning to build a home for them from the ground up. There’s a strange awkwardness looming at the beginning of the show; the couple is tentative, side-stepping around each other—behavior you’d expect from strangers rather than a couple who have started a life together. We find out that Lydia had a stillbirth only a short while back and both she and Daniel have since retreated to their own worlds, each trying to cope with the loss of a child in their own way.

On the night of the Perseids, Daniel and Lydia agree to come together for the first time since the loss of their child, attempting to bridge the chasm that has grown between them by “sticking to the plan” and doing what they’ve always done: setting up camp in the middle of the woods, cracking open a few Narragansett tall boys, painting each other’s faces with childish delight, calling up the ghosts of an old imaginary couple (aptly named Frank and Mary Alice) who lived on the land before them, and making love under the vast expanse of falling stars. However, the pretending only lasts so long before grief sets in, along with the painful and confusing realization that Daniel and Lydia have each been irrevocably changed by this loss, leaving them wanting vastly different things, each essentially alone in their suffering.

While Trout (pulling double duty as actress and playwright) gives an honest, if slightly one-note, performance as Lydia, her intimate and poignant writing (especially during the hilarious and delightful conjuring of Frank and Mary Alice) is truly enjoyable and kept me quietly smiling. Although I appreciate the nod to Daniel’s make-shift camp setup with four tents onstage, I’m not sure how the constant shifting of scenery aids the piece, and wish that the movements detracted less from the moments between Daniel and Lydia (especially the space blanket during the beautiful and brief star-gazing scene.)

Does the play have its flaws? Perhaps; I was a bit confused and taken aback at the end. But overall, Caffall’s earnest and heartfelt performance, coupled with the few moments of beautiful subtlety in Trout’s writing, left me quietly rooting for this new theater company from Brooklyn.