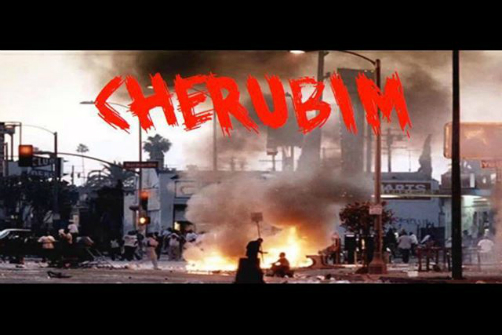 BOTTOM LINE: A fiery drama exploring police brutality and race relations in America; Cherubim won’t start a revolution—but it could start a conversation.

As audience members, we are constantly looking to be transported to another world. We long to visit fantastical, fictional locales as a means of distraction, or we immerse ourselves in historical moments in an effort to better understand our present. Cherubim is an example of the latter; though set in 1992 Los Angeles, its subject matter could have just as easily been ripped from today’s headlines.

At the center of Cherubim is the Charmichael family: the rebellious-yet-well-meaning Samantha (Caitlin Rose Mahoney), her father, Benedict (Nicholas Tucci) and his new wife, Melinda (Toni Belafonte), and their young daughter, Kea. All is seemingly well for the Charmichaels—until Kea is teased in school for being mixed-race and, later that day, goes missing. Two men from the LAPD (Larry Mitchell and Jacques Leon) are brought in to investigate, and it’s here that the ruptures begin, and that the turmoil bubbling throughout the city starts to seep into the Charmichael’s own living room.

While Cherubim doesn’t entirely succeed as a compelling drama, it definitely manages to be a provocative one. Director/playwright Tess R. Ornstein is wonderfully adept at offering up a variety of voices, allowing her characters’ interests to interact and contradict truthfully and—sometimes—explosively (a monologue from Melinda regarding her blackness is one of the piece’s highlights, delivered with gusto by Belafonte). And while I’m not convinced the piece warrants its two-and-a-half hour running time, Ornstein’s script was certainly elevated by her production, complete with impressive work from scenic designer Sarah Karl and scenic and costume designer Anna Grigo.

Periodically throughout the play, a television set broadcasts news reports and sound bites contextualizing Cherubim in 1992 Los Angeles against the final days of the Rodney King trial and the beginnings of its resultant riots—but it’s plenty easy to imagine its action unfolding in 2014 Ferguson or 2015 Baltimore. Clearly, we’re not finished talking about these issues. And Cherubim is as good a place as any to let that conversation start to unfold.